‘Coalitions of the Willing’ Remain a Useful Diplomatic Fallback Plan 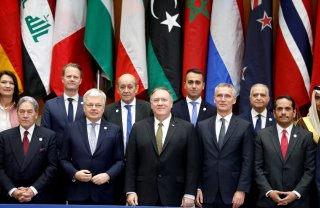 President Joe Biden strongly supports international cooperation to address global challenges and advance U.S. interests. But what should the Biden administration do when multilateral institutions fail at crisis management? While “coalitions of the willing” are an effective alternative to the United Nations (UN) and regional organizations, they are unpredictable in volatile and fast-moving international emergencies. When would it be advantageous for the United States to focus on coalitions of the willing as an alternative to traditional multilateral diplomacy?

The UN is integral to the rules-based international order, which emerged in the second half of the twentieth century. According to the preamble of its charter, the UN was established: “To save succeeding generations from the scourge of war.” It seeks to prevent disputes from escalating into war, restore peace following the outbreak of violent conflict, and promote sustainable peace in post-conflict societies. UN humanitarian and development agencies, such as the UN High Commissioner for Refugees and United Nations Children’s Emergency Fund (UNICEF), do amazing work in the world’s most troubled hot spots.

The UN is indispensable but also flawed. The UN Security Council (UNSC), which is responsible for peace and security, has been politicized. Neither Russia nor China, who have veto power as permanent members of the UNSC, support reforms that could dilute their power and influence. In its current form, the UNSC has institutionalized power imbalance and lacks legitimacy.

The UNSC was a graveyard for international diplomacy during the Cold War. Cantankerous relations are back, undermining the world body’s effectiveness.

NATO can help, but it is no panacea for global crisis. Its effectiveness was diminished by Donald Trump’s mixed messages and constant criticism. International organizations are handicapped when a member state pursues its national interests, foregoing international consensus.

NATO is facing an existential crisis. Turkey, a NATO member, ignored U.S. entreaties and purchased S-400 missiles from Russia. Turkey’s action raises a critical question: Would it align with the alliance or Moscow if NATO responded to intensified Russian military operations in eastern Ukraine?

The European Union (EU) is similarly disjointed. It has economic clout but struggles to adopt a common defense and security policy. For example, the EU is mediating the Kosovo-Serbia dialogue on mutual recognition. However, five of its members refuse to recognize Kosovo. Internal dissent erodes the EU’s moral authority and effectiveness.

International organizations set up in the aftermath of World War II don’t correspond to the power structures of today. With the UN fundamentally flawed and regional organizations divided, what structures can most effectively promote peace and security, thereby advancing U.S. interests? “Coalitions of the willing” are an effective alternative.

The term, representing a variation on multilateralism, describes ad hoc measures by countries who band together based on shared and mutual interests. It is a force multiplier, enhancing the influence of any one country through cooperation with others.

There are several examples—both positive and negative. When Indonesia’s armed forces attacked East Timor in 1999, Australia led a coalition of the willing to stabilize the ravaged island nation and advance its independence. The UNSC ultimately adopted a reality-based approach and endorsed Australia’s intervention.

While a coalition of the willing advanced the greater good in East Timor, the opposite occurred in Iraq.

Unable to gain support for invading and occupying Iraq in 2003, the Bush administration established a coalition of the willing to support Bush’s agenda. In the Iraq case, the coalition was far from a force multiplier. It merely dramatized America’s isolation on the international stage.

Experience shows that coalitions of the willing are a double-edged sword. They are convenient when traditional diplomacy fails. They also build consensus among like-minded countries when international institutions cannot coalesce.

There is also a downside. Coalitions of the willing can exacerbate problems with the international system by presenting a shortcut to global engagement. They come in many forms and shapes and must be used with great caution—adhering to the principle: do no harm.

The Biden administration has shown that it is prepared to do the hard work of diplomacy, working with the UN and regional organizations. But when these institutions fail, the United States needs a fallback. When should the United States support coalitions of the willing and what process should be pursued for instigating them?

The Biden administration is committed to working with friends and allies to advance its global goals. In today’s complex and conflict-prone environment, the United States has ample opportunity to instigate coalitions of the willing formed around international crises.

If diplomacy is like jazz, requiring constant innovation, there are myriad options in the toolbox of U.S. foreign policy. A systematic approach, covering the waterfront of multilateral options, would give greater coherence to U.S. efforts aimed at ensuring world order.

David L. Phillips is Director of the Program on Peacebuilding and Rights at Columbia University’s Institute for the Study of Human Rights. He served as a Senior Advisor to the State Department during the Clinton, Bush, and Obama administrations, as well as a Senior Adviser to the UN Office for the Coordination of Humanitarian Affairs.