‘Persistent Modernization’ Is Building the Army of the Future 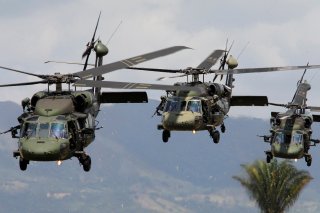 For decades, the Army has been working intensely to “network” the force in real time across domains. This effort goes back to the services’ Future Combat Systems program in the early 2000s and subsequent attempts to generate interoperability through the Joint Tactical Radio Systems software programmable radio technology. There were strides forward and even some breakthroughs, yet the ability to truly network the force in real time and quickly link sensors to shooters never quite materialized—until now.

In the last several years, the Army has demonstrated breakthrough ways of using artificial intelligence-enabled computers to massively shorten the sensor-to-shooter time and essentially attack “at the speed of warfare.” Some of these breakthroughs began to take shape during the Army’s Project Convergence in 2020.  Mini-drones, larger unmanned systems, helicopters, and ground combat vehicles are now increasingly able to operate as data-sharing “nodes” across a joint force, largely due to breakthroughs in the application of artificial intelligence (AI) and data analysis, as well as the successful use of gateway systems to connect data from otherwise incompatible transport layer technologies. While there is no question that current progress builds upon and has been informed by previous efforts, there have also clearly been paradigm-changing advancements.

What changed? Lt. Gen. Thomas Todd, the chief innovation officer for Army Futures Command, described the shift to the National Interest as a movement toward “persistent modernization.”

“If you really think about it, we've gone from a fairly episodic approach every once in a while—kind of coming up with the next big idea—to really persistent modernization. That's where we've always wanted to be; we don't ever want our soldiers to have a career where they're never modernized. We actually want them to expect to be modernized. And to always be trying to figure out how to use the next thing, that they'd obviously give us an advantage on the future battlefield,” Todd said.

There are some very interesting parallels between the concepts behind the Army’s former Future Combat Systems (FCS) and Project Convergence. Generally speaking, one could suggest that Project Convergence represents the achievement of the “system of systems” networking ambitions first outlined by FCS. While FCS was canceled, in part because the technology had not reached the requisite level of maturity, the ability to link armored vehicles to sensors, drones, and even dismounted soldiers in real-time was indeed the vision of FCS. Certainly, the advent and maturation of many key new technologies, coupled with enterprising Army modernization strategies, helped accelerate the process of bringing this to fruition at Project Convergence. Nevertheless, Todd said that the Army’s effort has been filled with a sense of “urgency.”

“There's a huge sense of urgency inside the Army. Hence, the major institutional trench change to get after concepts and early technology so that we inform and actually have better chances of success of our programs work. Make no mistake about it: this is no game we're in—we're in the business of life and limb, and we cannot get it wrong, or we have to get it at least less wrong than our adversary. And at the end of the day, we're not going to be perfect. But I think, you know, the experimentation we're doing in real-time with these new concepts allows us to have a much better chance of getting it right,” Todd added.