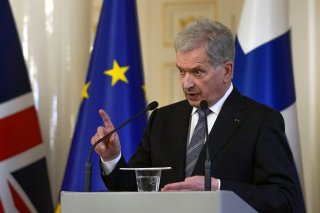 The Russian Foreign Ministry harshly criticized the Finnish government over its intent to join NATO within the coming year, warning that Moscow would seek to take “retaliatory steps” in order to maintain the balance of power.

“The statement by Finnish President S. Niinisto and Finnish Prime Minister S. Marin, who spoke today in favor of Finland joining NATO, is a radical change in the country’s foreign policy,” a Russian-language statement released by the foreign ministry read. “Helsinki must be aware of the responsibility and consequences of such a move.”

The statement added that “Russia will be forced to take retaliatory steps, both of a military-technical and other nature, in order to stop the threats to its national security that arise in this regard.” It claimed that Finland’s move toward NATO, a step away from its historic policy of neutrality between Russia and the West, would violate Helsinki’s earlier diplomatic commitments, including the Paris Peace Treaty of 1947 and the friendship treaty signed between Russia and Finland in 1992.

Finland’s entry into NATO would enhance Helsinki’s military cooperation with the armies of the other NATO countries and place them in a unified command structure. It would also provide Finland with protection under NATO’s Article V, which guarantees that an attack on Finland would be met with a collective response from the other members of the alliance. Most worryingly for Russia, it would make it easier for NATO to station weapons on Finnish territory. Although Sweden has also made moves toward joining NATO, Russia has demonstrated particular concern over Finland’s prospective accession, as the country shares an 830-mile border with Russia and is less than 100 miles from Saint Petersburg, Russia’s second-largest city.

Russia’s invasion of Ukraine—which Russian leader Vladimir Putin defended as necessary to ensure Russia would not be invaded in his annual Victory Day speech on Monday—sharply polarized public opinion in Sweden and Finland, leading to a rapid increase in support for joining the NATO alliance.

In remarks on Wednesday, Niinisto argued that Putin had been responsible for Finland’s decision to seek NATO membership, both because of the invasion of Ukraine and because he had repeatedly demanded that Finland could not enter the alliance in the months before it—a demand that Niinisto characterized as undermining Finland’s sovereignty.