“Chinese Virus”: Why Is the Media So Obsessed with That Term? 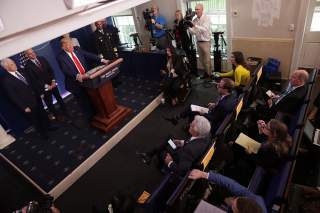 America is in a state of lockdown, the stock market is plummeting, and countless people around the world could get sick and die as the result of a deadly pandemic, but still many in the American press will use their time to give cover to the People’s Republic of China.

At a press conference Wednesday, President Donald Trump was asked why he used the phrase “Chinese virus” to describe the new coronavirus disease, known as COVID-19.

Cecilia Vega of ABC News asked: “Why do you keep calling this the Chinese virus, there are reports of dozens of incidents of bias against Chinese Americans in this country. Your own aide, [HHS] Secretary [Alex] Azar, says he does not use this term. He says ethnicity does not cause the virus. Why do you keep using this? A lot of people think it’s racist.”

Trump doubled down, explaining that he chose to use the “Chinese virus” phrase to push back on the idea, spread by Chinese officials, that the virus was started by the U.S. military.

Again, in this time of crisis, our esteemed press is asking the questions most on the minds of the American people, right?

Just unbelievable. What’s worse than the knee-jerk speech-policing in such a serious time is how it’s clearly being used for the purposes of China’s propaganda.

Trump is right about his rhetoric. The virus originated in Wuhan, China, and it’s appropriate to label it by where it came from, as we do with many other viruses.

Just a few months ago, most American media outlets had no problem identifying COVID-19 with China, unless they think they were peddling racism and xenophobia as many now claim.

As Trump noted, Chinese officials and various state-backed media outlets have stepped up their campaign to lay this disaster at the feet of the United States.

They are using the idea that calling COVID-19 the “Chinese virus,” “China coronavirus,” “Wuhan virus,” or anything else that may direct attention toward their government’s misbehavior is racist and must be silenced.

It’s a message that’s well-tailored to suck in the social justice warrior journalists and left-wing commentariat to carry out the goals of the communist Chinese regime.

It’s important to keep a focus on the origin of the pandemic in light of the fact that the actions of the Chinese communist government to suppress information in the early stages of the outbreak have deeply exacerbated this catastrophe.

It’s incredible that in the face of the Chinese government’s expulsion of American journalists and refusal to provide reliable information about the outbreak in China, our own press is most troubled by the president’s attempt to draw attention to this with a simple phrase of identification.

And if American journalists are so concerned about racism and government mistreatment of minorities, why not get more worked up about China’s current treatment of Muslim Uighurs who’ve been detained in concentration camps and, according to reports, are being used as essentially slave laborers to make up for labor shortages.

The biggest threat we will face in coming months isn’t racism, it’s the potential for a massive pandemic worse than any we’ve seen in a century.

It’s especially important that as we first manage the very serious health crisis, we also remember how a ruthless authoritarian regime turned a limited catastrophe into a global one.

Hopefully this message will get through to the press. Maybe now is the time to restore some of their lost credibility rather than further damaging it.

This article by Jarrett Stepman first appeared at The Daily Signal on March 18.