“Japanese Super Interceptor”: Japan Could Get a ‘Super’ F-15 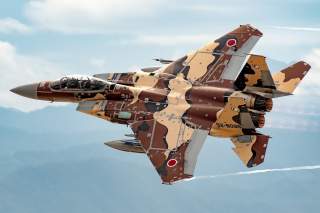 The U.S. State Department in late October 2019 cleared the Japanese government to spend up to $4.5 billion upgrading 98 Boeing F-15J fighters to a new and greatly-improved standard it calls the “Japanese Super Interceptor.”

The JSIs could fly alongside the Japanese air force’s growing fleet of stealthy Lockheed Martin F-35 Joint Strike Fighters, each type complementing the other. The U.S. Air Force meanwhile is pursuing its own, mixed force of F-15s and F-35s.

Both air arms are trying to balance the strengths and weaknesses of stealthy and non-stealthy aircraft. While a new stealth fighter can cost as much as a conventional fighter does to procure -- around $100 million per copy -- the types possess different capabilities.

Stealth fighters are better at conventional planes at avoiding detection owing in part to their ability to carry their weapons internally. But weapons bays displace fuel, resulting in stealth fighters lacking range and payload compared to non-stealthy fighters.

Again owing to stealthy planes carrying their weapons internally, non-stealthy planes usually can carry larger weapons than their low-observable counterparts can do. These bigger munitions could include the latest, super-fast “hypersonic” missiles.

Governments are discovering that a balanced air arm can include both kinds of fighters. Thus the Japanese F-15 modernization effort comes as no surprise.

“Japan already has the advanced AAM-4B, which has its own AESA seeker, but there are reports that the country might consider acquiring variants of the U.S.-made AIM-120 Advanced Medium-Range Air-to-Air Missile,” Joseph Trevithick noted at The War Zone.

The AIM-120s are smaller than the AAM-4B and reportedly have a shorter maximum engagement range, but the F-15J JSI may be able to carry substantially more missiles of the American weapons, which could compensate for that relative loss of capability.”

Beyond that, Japan is working with European missile consortium MBDA's division in the United Kingdom to develop the Joint New Air-to-Air Missile. This weapon will reportedly leverage the seeker and other components of the AAM-4B together with features from MBDA's ramjet-powered Meteor.

Japan so far has ordered 105 F-35As and 42 vertical-landing F-35Bs, making it potentially the third-biggest operator of the single-engine stealth fighter after the United States and the United Kingdom. The F-35s and F-15 JSIs by the mid-2020s could account for the majority of Japan’s fighters.

“The F-15J JSI would be a valuable companion for Japan's F-35As, offering a reliable alternative for performing routine air-defense sorties,” Trevithick explained. “The stealthy Joint Strike Fighters could also work together with the upgraded Eagles, flying ahead and feeding targeting information to the non-stealthy jets, exploiting their greater load-carrying capacity.”

The U.S. Air Force is hoping to achieve similar symbiosis between its own F-15s and F-35s. The American air arm in 2020 plans to order the first of 144 brand-new F-15EXs in order to replace its 1980s-vintage F-15Cs. The USAF at the same time is adding F-35s to its fleet in the hope of eventually operating more than a thousand of the stealthy jets.

The F-15EX “could serve as a unique platform for various missions in the future beyond the currently established mission set serviced by the F-15C/D community,” Tyler Rogoway reported at The War Zone.

“These include acting as a flying weapons-truck and carrying outsized weapons, including hypersonic cruise missiles and very-long-range air-to-air missiles, to controlling flocks of stealthy unmanned combat air vehicles, to acting as a network relay between [stealthy] fifth-generation and [non-stealthy] fourth-generation fighters, as well as other assets in the battlespace.”