“Slander” the Chinese Military Online and You’ll Go to Jail 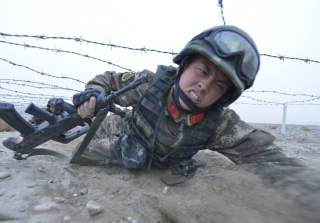 Don't you dare tweet that the Chinese military is corrupt. Or, that Chinese weapons don't work. Or, say anything else online that makes the People's Liberation Army look bad.

If you do, you may go to jail.

The Chinese government has drafted a law that would criminalize the spreading of online "rumors" regarding China's military.

"The proposal calls for amending and improving laws and regulations, including the country's Criminal Law, to create a better litigation system for clearer, more authoritative and powerful legal tools against online military-related rumors," announced Chinese state-run media. The law was scheduled to be considered by the National People's Congress in March, which almost certainly approved it.

Chinese officials worry that the Internet and social media are unleashing a tide of fake—though others might say truthful—news. "In recent years, more than 10,000 military-related slanderous comments have surfaced online annually," complained Jiang Yong, a Chinese legislator and political commissar of the PLA Beijing Garrison Command.

One online rumor claimed that China was "offering soft loans of 20 billion yuan (US$3 billion) to India in exchange for their retreat" from disputed territory claimed by China.

Some "rumors" are quite tawdry. "After a sexual harassment scandal around a Beijing kindergarten broke in 2017, a woman was briefly detained for alleging the case involved serving members of the PLA," noted the South China Morning Post. "Her accusations were later denied by the military."

In addition, "10 people were also briefly detained or warned by local authorities in 2015, for 'fabricating and disseminating rumors' about the PLA," the newspaper said. The new law follows a 2018 law that criminalized "slander" against "heroes and martyrs," including war heroes.

Chinese leaders may also be worried about persistent corruption within the military. Policing the Internet would be another way to stifle publicization of these problems.

These laws fits "into the general pattern of the PLA's increasing efforts to shape public opinion," Adam Ni, an Australian expert on the Chinese military, told the National Interest. "The PLA has become quite prominent in the Chinese media in recent years, partly because it has become a point of pride for many Chinese. The PLA has become an active shaper of public opinion through both state media as well as social media. Active engagement on social media, high-quality promotional videos, and new laws and regulations are some of the ways that it has sought to shape public narratives in relation to the military."

But for the Chinese military, social media can be a double-edged weapon "I think the CCP [Chinese Community Party] and the PLA are worried that with a hyperconnected social media landscape, criticisms of the military could snowball out of control causing damage to the prestige of the military," Ni added. "This mirrors the efforts by the Chinese government to criminalize what it characterizes as online 'rumors' and 'slanders.'"

To be fair, there are people and institutions in the United States that would love to criminalize rumors and "fake news." Blocking such criminalization are Constitutional protections safeguarding free speech, because what is considered fake news is very much in the eye of the beholder. But for authoritarian governments like Russia and China, whose popularity and even legitimacy rest on the prestige of their militaries, civil liberties take a back seat.