This 1 Country Makes Submarines Tough, Stealthy, and Cheap (Not America) 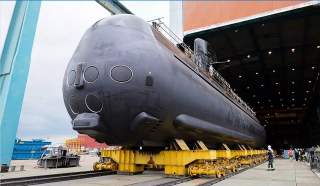 Key Point: Sweden already has excellent submarines, and they're working on a new, even better design.

For decades, submarines came in two discrete flavors: traditional diesel-electric submarines that need to surface every day or two to recharge their batteries using noisy, air-breathing diesel engines, and nuclear-powered submarines that could quietly hum along under the sea at relatively high speeds for months at a time thanks to their nuclear reactors.

Sébastien Roblin holds a Master’s Degree in Conflict Resolution from Georgetown University and served as a university instructor for the Peace Corps in China. He has also worked in education, editing, and refugee resettlement in France and the United States. He currently writes on security and military history for War Is Boring. This piece was originally featured in June 2018 and is being republished due to reader's interest.