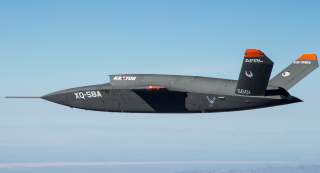 The U.S. Air Force's new "wingman" drone could evolve to become fully autonomous, the company developing the drone revealed to The National Interest.

The roughly 28-feet-long, jet-powered XQ-58 demonstrator flew for the first time over Yuma, Arizona on March 5, 2019, the Air Force Research Laboratory at Wright-Patterson Air Force Base in Ohio announced.

The XQ-58's first flight signals an expansion of international efforts to develop unmanned aerial vehicles that can fly and fight in mixed formations with traditional, manned warplanes. Australia, Japan and China also are developing wingman drones.

Just how autonomous the designs are could help to determine how successful they are on the marketplace -- and how effective they might be in combat. The more autonomous a particular wingman drone is, the more likely it is smoothly to integrate with busy human pilots.

Fighter pilots already are "task-saturated," to borrow a military term. Despite advancements in avionics that can simplify a fighter cockpit, a pilot still keeps busy flying his plane, monitoring his sensors and the air space around him and communicating with his wingmen and troops and battle-managers on the ground.

If a pilot also has to directly control potentially several drone wingmen -- feeding them navigation waypoints, regulating their sensors and commanding them to fire weapons -- he might get overwhelmed and, say, fail to notice an incoming enemy fighter.

Brian Laslie, a military historian and author of the The Air Force Way of War, said he spoke to some pilots about the wingman-drone concept and got a mixed response.

"I asked around and the general consensus seems to be the idea has merit," Laslie told The Daily Beast, "but I think there is some hesitancy in certain communities from full acceptance. The phrase, 'I am already task-saturated' came up more than once."

But if a wingman drone is highly-autonomous, it could relieve a pilot of the burden of micromanaging the unmanned fighter. For that reason, the XQ-58 could appeal to the Air Force beyond the academic confines of the Air Force Research Laboratory.

A Valkyrie could follow commands from a nearby fighter pilot, the crew of a surveillance plane or even a controller on the ground. "Command-and-control options include both ground-based and airborne," Kratos explained.

There are analogues. A crew on the ground directly pilots, via satellite, the Air Force's Reaper drone. The larger Global Hawk drone, by contrast, automatically follows waypoints that ground controllers remotely feed to it.

The Pentagon has experimented with a very small, fully autonomous -- and expendable -- drone called Perdix that launches from the countermeasures dispenser aboard a manned fighter and flies to a pre-loaded waypoint.

A fighter-style wingman drone costing several million dollars would be more capable and less expendable than a $1,500 Perdix is. But if the Air Force and Kratos maximize the type's autonomy, it could be just as autonomous as the smaller drone is.

Under that concept, a fighter pilot would issue only very vague commands to his drone wingmen, perhaps telling them where to fly to and which sensors to activate.

It's likely the human pilot also will have to give the drones permission to open fire. Eighteen years after the Air Force first added weapons to its Predator drones, commanders on the ground still approve all weapons-use.

Less clear is just how stealthy the XQ-58 might be. "No specific stealth objectives were established for this vehicle development-and-demonstration activity," Kratos told The National Interest.

But a glance at the photos and videos of the XQ-58 that Kratos and the Air Force have released reveal several low-observable design elements, including a top-mounted inlet, sawtooth panel edges and, on one copy of the drone, a silvery, potentially radar-absorbing paint job.

The Valkyrie also boasts a narrow, shielded exhaust nozzle that could minimize the aircraft's radar and infrared signature in its rear aspect.