10 Reasons Nearly Nothing Can Stop the F-35 Stealth Fighter 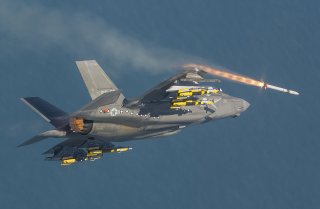 October 26 of this year marks the 20th anniversary of the day in 2001 when the development contract for the F-35 fighter was awarded to an industry team led by Lockheed Martin.

Called the Joint Strike Fighter at the time, it was an improbable project: a family of tactical aircraft that could do everything for everybody, in the process replacing most of the nation’s Cold War fighter fleet.

Today that project has come to fruition. Now designated F-35, the fighter really can execute all of the missions it was conceived to perform for the Air Force, Navy and Marine Corps—not to mention a growing fraternity of users in allied nations.

However, despite the delivery of over 600 F-35s, there remains a community of skeptics ready to seize on any indication the program might be flawed. That has less to do with the performance of the fighters than with the scale of the program, the secrecy of some features, and the way in which popular culture regards weapons spending.

So for the sake of those who want a simple explanation of what the program has accomplished, here are ten unambiguous signs that the F-35 fighter is a success. Collectively, these ten indicators support the assessment of the late Senator John McCain that the F-35 is destined to be “the greatest combat aircraft in history.”

F-35 is the most survivable fighter in the world. All three variants of the F-35 have met their design goals for stealth. What that means in simple terms is that they can’t be tracked or targeted by enemy radar. In addition, the heat from their engines is masked to foil heat-seeking missiles. When these “low observable” features are combined with the unique situational awareness afforded pilots through sensor fusion, it is easy to see why F-35s participating in military exercises typically defeat 20 or more adversary fighters for every F-35 that is lost. The Air Force’s F-22 fighter is similarly survivable, but some facets of the F-35 design are stealthier.

F-35 is the most versatile fighter in the world. F-35 was designed as a family of fighters sharing common technology. The Air Force variant is several times more capable than the tactical aircraft it replaces at air-to-air combat, air-to-ground strikes, suppression of enemy air defenses, and collection of reconnaissance. The Marine variant adds to these features an ability to land and take off vertically, while providing close air support of ground forces. The Navy variant can carry large bombloads to greater distances than legacy aircraft—nearly 700 miles without aerial refueling. All three variants host advanced electronic warfare systems and other technology suitable for engaging in information operations.

F-35 is the most lethal fighter in the world. Survivability and versatility enable F-35 to take the fight to adversaries in a way that no predecessor could. In combination with the connectivity afforded by secure digital networking, the F-35 can accomplish kinetic and non-kinetic attacks with far greater effect than other tactical aircraft. Over 5,000 pounds of munitions can be carried internally while maximizing stealth or, if circumstances dictate, the fighter can also carry external loads for a total of 22,000 pounds of ordnance. Either way, an F-35 can precisely destroy multiple targets in a single flight while incurring far less risk than legacy fighters.

F-35 is being purchased by a dozen allies. From its inception, development of the F-35 fighter was shared by three U.S. military services with allies such as Australia, Italy and the United Kingdom. As a result, it has a sprawling industrial support base around the world. In recent years, additional overseas allies have joined the program, including Israel, Japan, Singapore and South Korea. Today a dozen U.S. allies have committed to the program with more likely to join, providing a clear vote of confidence in the price and performance of the F-35 family. Allied participation ensures that forces engaging in future coalition warfare will share similar capabilities, simplifying the execution of war plans.

F-35 is operational with nine nations and ten services. Allied participation in the F-35 program today isn’t just predicated on the future promise of a fifth-generation, multirole fighter. Hundreds of F-35s including Air Force, Navy and Marine variants are actually operational around the world. Six air forces have conducted military missions, such as the Israeli strike against Iranian targets in Syria during which, as predicted, the F-35 went undetected. The F-35 thus is steadily replacing legacy fighters on four continents, reinforcing the global air dominance so crucial to U.S. and allied war plans.

F-35 is being continually improved. F-35 technology is frequently upgraded as new threats appear and new technology becomes available. The 15th production lot will feature new sensors, displays and apertures designed to keep the aircraft at the cutting edge of performance. Eleven new capabilities are being added to the electronic warfare suite, capabilities that either were not feasible or were not affordable when the program began. Some of the latest enhancements will reduce the cost of producing and operating the fighter. Planners are already looking ahead to the day when next-generation turbofan engines will increase the unrefueled combat radius of the aircraft to a thousand miles—a useful feature in the vast expanses of the Western Pacific.

F-35 is shaping the design of other aircraft. As it gradually populates the world’s air forces, F-35 is becoming the global standard for tactical air power. Rivals such as China and Russia seek to match its capabilities, without which they cannot hope to win future wars. In the United States, several key systems on the F-35 are being adapted for use on the Air Force’s future B-21 bomber, including the fighter’s F135 engines and its uniquely agile electronic warfare suite. Use of F-35 technology on other combat aircraft reduces the cost of their development and attests to the performance of the fighter’s core features.

F-35 is becoming much cheaper to build. The cost of building the fighter has fallen with each successive production lot, usually at a faster pace than government estimators predicted. All three variants saw production costs per plane drop by over 12% between the first and final lots funded during the Trump administration. At $78 million per fighter, the most common variant of F-35 today costs the government much less than the list price for a Boeing 737—the company’s least expensive jetliner. Some widebody jetliners sell for over four times the cost of producing the most expensive version of F-35, the Navy variant.

F-35 is becoming much cheaper to operate. The cost per flight hour of operating an Air Force F-35 fell 23% during the Trump years. The data are hard to interpret because the government typically reports them in 2012 base years rather than in current dollars. Nonetheless, an apples-to-apples comparison indicates F-35’s cost per flight hour is comparable to that of the Air Force’s legacy F-15C/D fighters. As of 2020, Air Force F-35s cost about 50% more per flight hour than the F-16, but the F-35s are several times more productive in terms of delivering effects such as the suppression of enemy defenses. Additional reductions in cost per flight hour are expected as maintenance procedures are refined and onboard technology is enhanced.

F-35 is the cornerstone of future Air Force plans. The Air Force is expected to absorb 70% of the F-35’s domestic production run. That will be sufficient to replace all of its Cold War F-16s. Air Force Chief of Staff C.Q. Brown last month described F-35 as the “cornerstone” of his service’s future fighter capability, pledging not to take money out of the program to fund more advanced concepts. As the only stealthy tactical aircraft currently in serial production, F-35 is the Air Force’s sole viable option for replacing its Cold War fighter fleet with aircraft capable of meeting the demands of modern warfare. The Air Force will continue to experiment with other concepts, but there is little doubt that F-35 is central to sustaining U.S. global air dominance.