Before the A-10 Warthog Got Its Wings, It Had to Outfly this Competitor 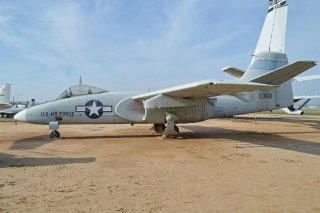 The United States Air Force’s A-10 Thunderbolt II – affectionately known as the Warthog – is one of the service’s longest-serving and most combat-proven aircraft. As the Air Force’s dedicated ground-attack aircraft, the A-10 has played a major role in most American military operations since its introduction and has successfully intervened on behalf of American ground forces on numerous occasions. But the A-10 did not get to where it is today by default, and the Warthog had to beat out a major competitor before it would be adopted as the Air Force’s preferred platform for performing the close air support (CAS) mission. That competitor was Northrop Grumman’s YA-9.

In the aftermath of the Second World War, the United States military had become convinced of the value of a dedicated platform capable of providing CAS to friendly forces on the ground that were engaged with the enemy. That belief was only strengthened by American military action in Vietnam, where the lack of a dedicated CAS aircraft proved to be detrimental.

In 1966, the Air Force began its pursuit of the Attack-Experimental (A-X) program, which was designed to introduce a new aircraft to perform the CAS mission. The Air Force’s request for proposals as part of the A-X program attracted several competitors, with the main contenders becoming Cessna, General Dynamics, Lockheed Martin, Northrop Grumman, and Republic (Fairchild-Hiller). In the end, only Northrop Grumman and Republic were chosen to move forward, and both companies developing prototypes that would be given the designations YA-9 and YA-10 (which would eventually become the A-10), respectively.

Both aircraft were designed to make use of the new 30mm Gatling-type cannon developed by General Electric as part of the A-X program, which remains the A-10 Thunderbolt II’s primary armament.

Northrop Grumman's YA-9 featured a conventional design that was similar to previous American jet fighter aircraft. Its straight shoulder-mounted wings allowed for the necessary number of hardpoints for mounting a range of ground-attack munitions while also allowing for better control while the aircraft was operated at lower speeds during attack runs, and could also fit the aircraft’s fuel stores that were required for long-range operations and long loitering periods.

The YA-9’s conventional design stood in stark contrast to the YA-10’s much more unique design which offered it a number of advantages, most notably regarding the placement of the engines. The YA-10’s engines were situated in such a way that they were both better protected and were also shielded to provide some protection against ground-based, probing radars.

The YA-9 first flew in May of 1972, and its performance was largely on par with the YA-10. Given the similarities between the two aircraft, a competitive “fly-off” would take place in October of that year and would continue into December. The contract would ultimately be given to the YA-10, largely as a result of its superior design.

Northrop Grumman built two prototype YA-9 aircraft, one of which is on display at March Air Field Museum while the other lives at Edwards Air Force Base.