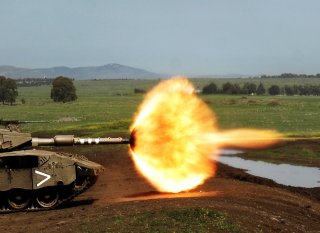 In late February Israel’s Ministry of Defense and the German Federal Ministry of Defense signed a deal to supply Rafael Advanced Defense System’s Trophy active protection system to the German military. It will be placed on Leopard 2 tanks. The system is already on Israel’s Merkava tanks and Abrams tanks in the United States. The success of Trophy in protecting main battle tanks is a major milestone for Israel and this year the system has seen ten years of operational service with Israel’s Defense Forces.

Israel’s Defense Minister Benny Gantz has praised the system as part of the country’s innovation and technology. “It is the product of Israel’s groundbreaking defense industry, which is crucial to strengthening the state’s security,” he said in February 2020. He would know the system well because as a career soldier who rose to Chief of Staff, protecting tanks in battle was key to Israel’s success in its last conflicts and will be key in the future.

I spoke with Rafael’s vice-president and head of the land maneuver systems directorate, Michael Lurie about the protection system’s heritage and what the future might hold. Already the system is becoming more lightweight with a forty percent reduction in size and weight overall, he says. That means it can be used on lighter vehicles like the Stryker in the United States. Rafael has seen orders for 2,000 of the system from different militaries and countries. This includes outfitting Israel’s Namer, an armored personnel carrier that is based in part on the Merkava design. It is supplying the United States with Trophy systems for four brigades so far. The German Leopards will be the next big tank to get the latest protection.

How did it all begin? Back in 2011 terrorists in the Gaza Strip got a surprise when they fired an anti-tank guided missile (ATGM) at an Israeli Merkava and the Trophy system was activated and had its first public operational interception. For Israel it is part of a wider success at intercepting threats, because the Iron Dome system that Rafael also developed had its first public succession April of the same year. Suddenly the game changing technology was providing Israel with unparalleled protection, the likes of which no country in the world had seen until that moment.

“We have the communications of the tank team,” says Lurie, recalling the 2011 success. The men were speaking amongst themselves and looking around and they saw movement in a nearby mosque. “Then suddenly you hear a noise and they say that an ATGM was shot and the system intercepted it, we have it live, and it’s a strange feeling, it gives you a sense of how the system works, you are in the tank and it works automatically like a guardian angel, it is there 24 hours a day and you don’t need to be aware of it and it protects; and it’s a great feeling to be responsible for that,” says Lurie.

Trophy is not only a defense system that stops ATGMs. It also provides the defender with knowledge of where the enemy is shooting from, so counter fire can be directed and a tank or another system can shoot back. This has improved maneuvering capabilities for the Israeli Defense Forces (IDF), Lurie says. “Now we don’t have to be that defensive about ATGM threats, you can maneuver more securely and do things in the past that you had to be careful of doing and that improved the IDFs capabilities to fight and hopefully that will apply to other militaries that buy the system.”

Israel prides itself on being agile and quick to develop and change technology for the battlefield. This is in part because the nature of threats are always changing. Iranian-backed groups like Hezbollah or Hamas are not standing still. They know Israel has better modern technology, but they also know that asymmetric threats can be used against Israel. They develop precise missiles or, in the case of Hezbollah, want precision guided munitions. They also seek better and different drones. Hamas and Hezbollah have tried using tunnels to get underneath Israel’s border. Anti-tank missiles were used by Hezbollah in the 2006 war. It also used anti-tank missiles against Israel in 2015 and 2019 in incidents along the border.

Lurie looks back forty years over the long history of tanks using various passive and then reactive protection systems that made them more capable at stopping missiles. “That lasted for a while and eventually tanks became too heavy and so you see the tanks got more protections and then need bigger engines with 900 and 1200 and 1500 horsepower and eventually we couldn’t put more armor on because the weight was too much, the missiles were getting better and better and we had to take care of that without adding more armor.”

In many ways a military arms race is a bit like evolutionary behavior of animals. Animals develop better protection against predators. Predators develop longer teeth or noses or tongues to get at their prey. Animals that are isolated on islands, for instance, may become large and slow like a Dodo bird because they don’t have predators. Unsurprisingly they go extinct when they are found by enemies that can kill them easily. Tanks and large battleships face the same problem. They work well for what they do until something comes along that makes them obsolete. The recent conflict in Azerbaijan between Azeri and Armenian forces showcased the use of drones to wreak havoc on Armenian ground forces, for instance. The United States thirty years ago put together an impressive coalition the decimated Saddam Hussein’s massive land army in only a month in 1991.

Trophy as a system met the kind of threats that were emerging against tanks. This is because the battlefield that many powerful militaries were facing was not one of conventional tank battles, like Kursk in 1943, but rather asymmetric or other threats. Lurie, who served in the IDF, notes that what we’ve seen over the last decades, from America in Afghanistan to battles in Yemen or Israel in Lebanon, is an asymmetric conflict. You don’t have tanks fighting tanks. “The main threat today is ATGMs, and you cannot overlook the threat of other tanks and so APS [Trophy] is not the only type of protection on a tank, the Merkava and Abrams has other measures but the Trophy takes care of the RPG and high-end missiles.”

He says the first challenge militaries face is equipping all their tanks with this kind of system. “It gives protection against all ATGMs and RPGs in the arena, we are not aware of a threat that can penetrate it.” Militaries around the world are likely looking at ways to get around this kind of protection. So far, they haven’t got there. “We are trying to look at other capabilities that might evolve and we are thinking about them ahead of time and getting ready and our system is ready,” says Lurie.

Israel is currently looking at creating future combat vehicles through what it calls the Carmel program. Rafael, Elbit Systems and Israel’s IAI, the big three of the defense industry in Israel, are all taking part in offering their technology for the program. The Trophy and other active protection systems could influence future designs of tanks. This can make militaries more maneuverable and make lighter armored vehicles safer. Infantry Fighting Vehicles like the M2 Bradley and Infantry Carrier Vehicles like the Stryker have often faced questions about their abilities to either stand up against missile threats or other armored threats. Active protection systems provide flexibility but also may influence a future generation of vehicles.

There is also going to be more competition in the active protection system market. Israel’s Elbit Systems acquired Israel Military Industries several years ago. IMI developed the Iron Fist which is supposed to be put on Israel’s Eitan armored fighting vehicle. In addition, it has been tested on the Bradley in the United States. “We want to remain best in the field,” says Lurie about Trophy. It is a complex system without a man-in-the-loop. However, that means you don’t want the system to respond to false alarms. These complexities, of not having misfires, is something Rafael has worked out over the decade the system was operational. Others who want to develop these kinds of systems need to put them to that test on a real-world battlefield. Israel has been fighting those kinds of wars in 2012 and 2014 in Gaza and on the border of Gaza, and also facing threats along the Lebanon and Syrian borders.

Work on the Trophy system goes back to the 1990s. The 2006 Lebanon war moved the concept forward faster because of the rapid need for such a system. Israel had the same decades of development in terms of air defense, moving forward with Arrow in the 1990s and then adding Iron Dome and David’s Sling in the 2000s. The Scud missile threat of 1991 and the Iranian threat woke Israel up to the need to have an indigenous capability against ballistic missiles. The war against a more advanced Iranian-equipped Hezbollah terror army necessitated better protection for tanks. This wasn’t immediately obvious because Israel’s army had stagnated when it was sent to deal with Palestinian rioters and small arms fire and bus bombings during the Second Intifada. The IDF that emerged out of that, with Trophy and Iron Dome and other systems is a revolutionary new model army, far removed from decades ago in terms of technology, digitization, battle management, networked capability and use of artificial intelligence.