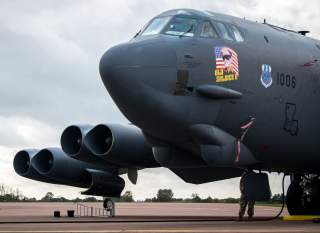 Key point: The Pentagon wants to keep its B-52s operational for the foreseeable future.

The U.S. Air Force could get a new version of the iconic B-52 bomber. The “B-52J” designation might supersede the current “B-52H” moniker that the flying branch has applied to the eight-engine bombers since they entered service in the early 1960s.

“The Air Force is likely to redesignate the B-52H as the B-52J once it receives a slew of modifications adding up to a ‘major modification,’” Tirpak wrote, quoting Brig. Gen. Heath Collins, the Air Force’s program executive officer for fighters and bombers.

The B-52 is slated to receive new engines beginning in about 10 years, and “that probably would be enough” to warrant a letter change, but the venerable bomber will also be getting new digital systems, communications, new weapons and a new radar, as well as a variety of other improvements.

Collins also said that Air Combat Command is considering the possibility of reducing the number of aircrew on the B-52, now that certain functions requiring weapon systems officers can operate autonomously. No decision has been made in that regard, Collins said.

"If Air Force plans hold up, the B-52 will be approaching nearly a century of service by 2050," Tirpak wrote in that issue. "To keep the airplane flying, the service plans to equip each B-52 with new engines, which are expected to be so much more maintainer-friendly and efficient that they’ll pay for themselves in just 10 years."

The Air Force twice in recent years has pulled old B-52Hs from storage in Arizona and refurbished them in order to replace bombers that have crashed. The regeneration efforts have allowed the flying branch to maintain a force of 76 B-52s.

More efficient engines could save $10 billion in fuel and maintenance costs through the 2040s, Tirpak reported, citing Air Force documents. The service wants 608 engines -- eight for each “new” B-52J.