100 Years of War: Why the 1911 Pistol Remained the Army's Sidearm of Choice 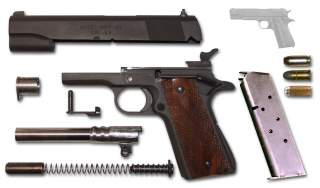 Minor adjustments have been added here and there, but the general appearance and function of the gun has largely been left unchanged.

The gun has appeared in no fewer than 200 films. Many of the great manly actors carried 1911s: Humphrey Bogart in High Sierra; Steve McQueen in The Getaway, The Hunter and The Sand Pebbles; and Tom Selleck in Magnum P.I. Dick Tracy carried a 1911 rather than the police revolvers of his day, and it set him apart from the rest of the cops and robbers in his comics.