100,000 People in Ohio Are Infected with Coronavirus: Health Professionals 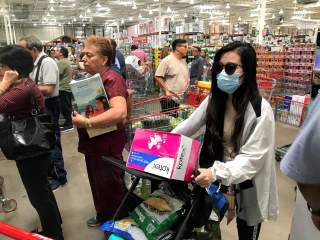 An eye-raising announcement from health professionals in Ohio estimates that currently one hundred thousand people in the state are infected with the coronavirus, and that they expect the number to double every six days. At the moment, only five people in Ohio have tested positive for the disease, out of 11.7 million residents. That would put the projected number of infected at 1%.

The coronavirus is “among us, but we can’t see it yet,” said Dr. Amy Acton. One of the reasons we are unable to see it is a severe lack of testing, which has bogged down American efforts at containment since the virus reached North America. That leaves the existence of people who are infected but not confirmed.

“We have about, over a thousand testing kits today over at the Department of Health, but we also have private labs that have this capability. Now some of our major hospitals are coming online, basically, in regard to having testing kits,” Ohio Governor Mike DeWine told Fox News this morning. “So, you’re going to see more tests done in the next few days, and of course the number of people who are testing positive are going to go up.”

The one hundred thousand number is based on community spread, an estimate that extrapolates from the number of known cases and reaches the conclusion based on percentages. “Whenever you know of two people that have it due to community spread, then you can assume that 1% of your population has it," said Melanie Amato, press secretary for the Ohio Department of Health. Her citation is a 2017 CDC report.

There has been pushback over the legitimacy of the hundred-thousand-person estimate. If accurate, Ohio would currently contain more people infected with the coronavirus than were ever diagnosed in the Wuhan province of China, where the virus originated. Trevor Bedford, a scientist with the Fred Hutchinson Cancer Research Center, has said the virus has not been circulating in Ohio long enough to reach that high a number, and that there were no corresponding deaths that would correlate with that number of infected.

On Monday, Governor DeWine declared a state of emergency in Ohio. This involves canceling all nonessential travel by public employees and recommending the cancellation of all meetings of large groups. Starting Tuesday, public schools in Ohio will start a three weeklong break.