In 1895, China and Japan Went to War. Nothing Has Been the Same Since. 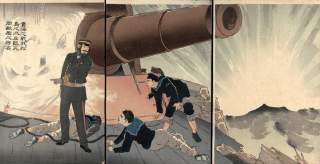 Key Point: A conflict that changed the balance of power in Asia.

FROM AN American perspective, the significance of this short intra-Asian struggle for regional supremacy could not have been immediately obvious. Although U.S. troops helped put down the Boxer Rebellion in 1901, and Theodore Roosevelt won a Nobel Prize for his role in negotiating an end to the Russo-Japanese War several years later, Americans still lived in a world in which a foreign rivalry over the Balkans mattered far more than one over Korea or Taiwan.

Compared with the global conflicts of the subsequent century—and even the great struggles of that which preceded it—the war that broke out on the Korean Peninsula in the summer of 1894 was a brief and relatively bloodless affair. In six months of fighting, on land and at sea, military casualties never exceeded those of Waterloo or Gettysburg. At a time when most in the West still regarded East Asia as a distant backwater, the war attracted little attention outside of its own neighborhood.

Yet for those seeking to understand the perilous politics of the region today, there is no better place to start than the First Sino-Japanese War, which pitted China's fading Qing Dynasty against an ascendant Meiji Japan in a contest for regional supremacy. Japan's runaway victory not only marked a dramatic turning point in East Asia’s political order, but also helped to set the stage for several major fissures which still bedevil the region: the division of Korea; the uncertain status of Taiwan; and the increasingly dangerous dispute between Beijing and Tokyo over the Senkaku Islands in the East China Sea.

TODAY, KOREA’S situation at the center of Northeast Asia is a source of economic advantage, and is one reason the South Korean cities of Incheon and Busan are among the busiest transportation and shipping hubs in the world. For much of recorded history, however, it has also been a source of tragedy, as armies from the Asian mainland and the Japanese archipelago have used the Korean Peninsula either a bridge or a buffer. Two sets of invasions—by the Mongols, in the thirteenth century, and the Manchus, in the seventeenth—helped tie Korea to China, which itself also fell to the same bands of northern horsemen.

While Korea had always been greatly influenced by its giant neighbor, it became a particularly eager protégé after the Mongol Yuan Dynasty was replaced by the Ming, during which time Korea’s Joseon Dynasty adopted a strict form of Confucianism as its governing philosophy and borrowing extensively from Chinese art and philosophy. The establishment of the Manchu-led Qing Dynasty in 1644 dealt a painful blow to Korea’s political and intellectual elite, which regarded the northerners as unworthy heirs to the Middle Kingdom’s throne, although Joseon continued to pay tribute under duress.

By the late-nineteenth century, with the Qing under siege from inside and out, Korea was the brightest jewel remaining in its once-glittering crown of vassals. And when its grip began to slip, the decisive tug came from a surprising source. Although the Qing’s earlier political and territorial losses had come at hands of Western powers, its rival in Korea was one of its Asian neighbors, itself a former Chinese tributary.

Following the replacement of the Tokugawa shogunate by Emperor Meiji in 1868, Japan had embarked on a frenzied modernization campaign, rapidly transforming itself into a substantial military and industrial power. Although it had traditionally played second fiddle to China in the region, Japan now began to assert itself abroad, “opening” Korea in 1876 (as Japan itself had been opened by the United States in 1853), and compelling Joseon to renounce its status as a Qing tributary. Over the next two decades, Japan and China would repeatedly find themselves at odds in Korea, as each sought to gain an edge in the divided Joseon court.

In 1894, Korea’s delicate political balance was finally destroyed by an internal crisis, a peasant uprising with roots in a new religion and a hunger for land reform. After Joseon requested the China’s assistance in putting down the revolt, Japanese forces, too, leapt into the breach. Rejecting a Korean demand to leave the country, the Japanese instead orchestrated a coup, replacing the queen – a vigorous opponent of Tokyo’s influence – with a sympathetic clique. War, brewing since 1876, was now unavoidable.

Although the Qing Dynasty had pursued a “self-strengthening” movement of its own even before Japan gathered industrial steam, the conflict quickly turned into a shocking debacle for China. In battle after battle, its men and ships were routed by the Japanese, a people long seen as cultural and military inferiors—and whose only serious attempt to challenge China, three centuries earlier, had foundered on the Korean Peninsula. Now, Tokyo’s Prussian-style army and British-inspired navy won a series of victories in and around Korea, and also isolated the distant island of Taiwan, which had come under Chinese control in the early years of the Qing Dynasty.

THE TREATY of Shimonoseki, signed in April 1895, awarded Tokyo even more than it could have hoped for when the war began. Although Japan would have to defeat Russia, in 1905, to gain unrivaled control of Korea, the Qing was forced to give up its own claims to suzerainty over the Peninsula, which was now declared “independent.” In addition, the treaty also transferred Taiwan, “together with all islands appertaining or belonging to [it],” the first major acquisition of Japan’s imperial age.

In both the near and long term, the “loss” of Korea and Taiwan would have an enormous impact on Chinese domestic politics. One immediate effect was to reinforce existing dissatisfaction with the Qing, now responsible for a humiliation far more acute than previous losses to the British and the French. The fact that the Qing was a regime of “foreign” Manchus rather than Han Chinese gave this anger an added edge, and contributed to the development of a potent new brand of national identity.

Even after the fall of the Qing, in 1911, the terms of Shimonoseki continued to resonate. In 1936, Mao Zedong would tell the American journalist Edgar Snow that he could date his political awakening to reading a pamphlet decrying the “dismemberment” of China and the loss of Korea and Taiwan. If Korea, which had been annexed by Japan in 1910, wanted to “break away from the chains of Japanese imperialism,” Mao promised that the Chinese communists would provide enthusiastic support for its independence struggle.

Idealistic rhetoric notwithstanding, Mao’s commitment to extricating Japan from Korea had more to do with paternalism than altruism. Despite his conversion to Marxism, Mao was always an ardent Chinese nationalist, and he seems to have viewed Korea as a natural appurtenance of his own nation’s power. In speaking with Snow, he described Korea as “formerly a Chinese colony” (a questionable characterization of the traditional tributary relationship); many years later, he would favor the genial diminutive “Little Kim” to refer to his North Korean ally Kim Il-sung.

Although Mao never had the chance to help free Korea from Japan, a similar sense of noblesse oblige appears to have informed his decision to enter the Korean War in late 1950. Coming in the wake of Japanese rule, Korea’s division was a tragedy piled upon tragedy, but the communist regime in the North offered China a valuable buffer. Seeing it on the brink of elimination, Chinese premier Zhou Enlai outlined the threat to China in familiar terms: “The United States is following the history since the Sino-Japanese War of 1895, namely, to conquer the Northeast [i.e., Manchuria] before annexing China, and to occupy Korea before taking the Northeast.”

Oddly, from a contemporary standpoint, Japan’s capture of Taiwan in 1895 does not seem to have had the same inflammatory impact as the severing of the relationship with Korea. One reason may be that the island was simply not regarded as terribly important. Nor was it seen as terribly Chinese. A Dutch colony before it fell under control of the Qing, Taiwan was generally ignored by the Mainland (which even restricted migration to its shores), and was not treated like a vital asset until the arrival of European navies and the rise of Japan made clear its strategic significance.

Although Taiwan was returned to China after 1945, the reunion was short-lived. Because it became home to Chiang Kai-shek’s Nationalist regime-in-exile in 1949, Taiwan has been ruled from Beijing for less than 4 percent of its history since the Treaty of Shimonoseki. Indeed, although the overwhelming majority of its 23 million people are ethnically Chinese, many whose families lived on the island prior to Chiang’s arrival are inclined to believe that the Mainlanders were crueler masters than the Japanese.

Not surprisingly, few who hold such views yearn for a reunion with China. While the ongoing political division between Taiwan and the Mainland is a product of the Chinese Civil War, Taiwan’s development of a distinctive sense of identity – one related to that of their Mainland cousins, but rendered unique by history and culture as well as politics – is also a consequence of the settlement reached in 1895.