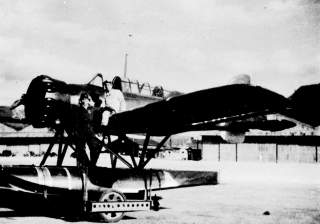 Australia was situated considerably closer to the action in the Pacific than the United States during World War II. Japanese aircraft bombed the northern city of Darwin, while ground forces advanced dangerously close in New Guinea. However, the Imperial Japanese Navy’s plans to capture nearby Port Moresby were frustrated at the Battle of the Coral Sea.

The Imperial Japanese Navy (IJN)’s next strike would target the U. S. naval base at Midway Island in June 1942. However, 8th Submarine Squadron was tapped to launch two diversionary raids using Type A Ko-hyoteki midget submarines to infiltrate harbor defenses.

Japan’s devastating Pearl Harbor attack included five Ko-Hyoteki—but not one of them succeeded in its mission. Carried atop large cruiser-submarine motherships, the two-person minisubs measured twenty-four meters long and carried two 17”-diameter torpedoes. Their lead-acid batteries afforded them only twelve hours of propulsion at slow speed. Though not intended to be suicide weapons, the Ko-hyoteki crew’s odds of escape and recovery remained extremely low.

Two cruiser-submarines sallied to ambush British ships besieging French-held Madagascar. Meanwhile, submarines I-22, I-24, I-27, and I-28 transited to Truk to load Ko-hyoteki for a southern raid, embarking a revised model with wider hulls, improved gyro-compasses, bow-mounted net-cutters on to slice through harbor nets, and accessways to allow manning while submerged.

Meanwhile, I-21 and I-29 scouted out potential targets in Fiji, New Zealand, New Caledonia and Australia using E14Y two-seat float-planes stowed in their submersible hangars. Reports of battleships in Sydney harbor led to the city’s selection as a target.

However, the plan rapidly went south, literally and metaphorically. On May 11, I-22 was torpedoed heading for Truk by the American submarine USS Tautog. Then the mini-submarine on I-24 suffered a battery explosion, forcing the sub to double back and pick up the spare Ko-hyoteki.

The surviving cruiser-submarines finally assembled thirty-five miles away from Sydney harbor on May 29 and launched a second scout-plane mission—this time only spotting the cruisers USS Chicago and HMAS Canberra and Adelaide in the harbor, rather than the expected battleships. The floatplane then crash-landed in heavy waters.

On May 31, the mothership-submarines approached points six to eight miles from Sydney Harbor and launched mini-subs M-14, M-21, and M-24. Sydney’s harbor defenses included small patrol boats, anti-submarine nets and “indicator-loops” of electromagnetic sensors. However, there were two 400-meter gaps on the edge of the loops—and only two of the eight loops were operational due to a lack of personnel.

As M-14 attempted to slip through the western gap, however, she collided with rocks and became entangled in the submarine net. A watchman spotted the floundering sub and informed the patrol boat Yarroma. She and another converted launch located M-14 at 10 PM and lobbed two depth charges towards the trapped submarine—but their pressure-sensitive fuses failed to detonate in the shallow water. Abruptly, M-14 exploded at 10:30 as her crew detonated her 300-pound scuttling charge.

M-24 brushed with disaster when she scraped the hull of a schooner, but then slipped into the harbor behind a ferry passing through an opening in the anti-submarine nets. At 10:30, she was illuminated by the Chicago’s searchlight—but the cruiser’s 5” guns couldn’t depress low enough to strike her, though quad. 50-caliber anti-aircraft machine guns did rake the submarine. Dodging two Australian corvettes, M-24 dove out of sight…and circled around.

At 11 PM, M-21 was also caught in a patrol boat’s searchlight. The armed steamer Yandra rammed the midget submarine and blasted the nearby waters with six depth charges, but M-21 finally escaped by diving to the seabed.

Harbor commander Rear Admiral Muirhead-Gould had been partying with the Chicago’s captain when submarine reports began trickling in at 10 PM. Though he raised the alarm, he then drunkenly snapped at the anti-submarine crews, implying they were jumping at ghosts.

But at 12:30, M-24 finally lined up a shot at the Chicago’s stern and launched both Type 97 Special torpedoes—but misjudged the angle. One plowed into Garden Island without detonating. The other narrowly skimmed under Dutch submarine K-IX and struck the dock beside the depot ship Kuttabul. The blast from the 772-pound warhead snapped the converted ferry in two, killing twenty-one sailors.

This finally triggered a more vigorous sub-hunt. At 3 AM, the loops detected M-21 sneaking back into the harbor. After a prolonged depth-charge bombardment by three hounding patrol boats, M-21’ crew committed suicide.

Only M-24 escaped—but though the motherships waited three days for the Ko-hyoteki to return, she never did.

To complete their mission, at midnight on June 8, I-24 surfaced off Sydney and blasted the city’s eastern suburbs with ten 140-millimeter shells. Two hours later, I-21 emerged seventy miles northeast off Newcastle and lobbed thirty-four shells at that city’s steelworks. The inaccurate bombardment resulted in only one injury, most of the shells failing to explode.

The Sydney attacks had little material effect considering the resources invested in them. Indeed, all of the Japanese submarines involved in the action, as well as both Allied heavy cruisers in the harbor, were sunk in combat over the next two years.

Nor was the raid a successful diversion. U. S. naval cryptographers decoded the plans for the Midway attack, and ambushing U.S. carriers dealt an irrecoverable blow to IJN by sinking four carriers between June 4-7.

However, despite the efforts of Allied censors, the Sydney raids did impart a sense of vulnerability to Australians. Civilians moved away from coastal zones, a coastal convoy system was implemented, and additional resources were devoted to shoring up demonstrably spotty defenses.

M-14 and M-21 were dredged up and rebuilt into a single submarine for display. The crew’s remains were buried with full military honors and returned to Japan in 1943.