In 1980s Battle With America, Iran Held Back Its Deadliest Missiles 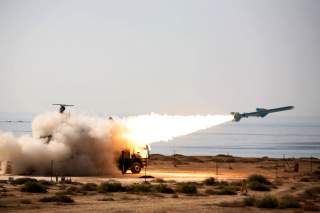 On April 18, 1988, the U.S. Navy launched Operation Praying Mantis, an air and naval assault on Iranian forces in the Persian Gulf. In a single day of intensive fighting, the Americans sank two of Tehran’s vessels and damaged other ships plus oil platforms, killing more than 50 Iranians.

The Iranians seemed defenseless and powerless to strike back. But a careful look back at Tehran’s technology and policy tells another story. In fact, Iran possessed the high-tech anti-ship missiles it needed to severely damage American vessels, but the country’s commanders deliberately held back, fearing out-of-control escalation of the conflict.

By contrast, British naval maneuvers during the 1982 Falklands War were far more complicated and innovative than the American op. Even Iran’s own naval campaign against Iraq in 1980 resulted in more widespread destruction than the U.S. inflicted on Iran eight years later.

Which begs the question—why did the American assault in April 1988 seem to so easily overwhelm Iran’s navy and air force? The key to answering that questions is to re-examine the Iranians’ ability to counter U.S. attacks.

If we accept the conventional wisdom, in 1988 Iran relied solely on aging stocks of weapons Tehran purchased from the West before the 1979 revolution that turned Iran into a pariah state.

These obsolete munitions included the air force’s American-made AGM-65A Maverick missiles. The TV-guided Mavericks were only able to target big ships, and at ranges shorter than 10 kilometers—well within the defensive missile range of the U.S. Navy warships.

Likewise, the Iranian navy’s American Harpoon anti-ship missiles were unreliable, owing to a lack of spare parts and specialized maintenance. In April 1988, the Iranian navy possessed just two working Harpoons—and one of them was aboard the Joshan missile boat, one of the vessels the Americans sank.

But the reality is that Tehran did possess working weapons—and enough of them to potentially severely damage the American fleet.

Documents obtained by War is Boring indicate that the Iranian air force had decided early in the 1980s to build its own stand-off guided weapon. Initial efforts combined the Maverick’s electro-optical seeker with an airframe based on American blueprints acquired by Iran before 1979.

The result was the Ghadr guided bomb. But Iranian officials were disappointed in the “new” munition. The Maverick-style seeker lacked range, so engineers sought to develop a new guidance system.

According to the memoirs of Gen. Mohsen Rafigh-Doost, Minister of Sepahand the head of foreign military purchases during the 1980s, Tehran acquired new cameras via Syria. Damascus shipped the sensors to Iran on a commercial airline flight. Isfahan, an Iranian optics company, integrated the new guidance camera on a Russian-style missile with a 750-pound warhead originally manufactured in the U.K.

The resulting weapon was similar to the Soviet KH-29. The Iranian air force tested the munitions at the air base in Hamedan and soon deployed the missile for surgical strikes on Iraqi oil facilities.

Iranian air force documents describe the weapon as a “stand-off electro- optically-guided missile with ability to attack targets in daytime or at night.” At the end of the 1980s, the air force published a book detailing its achievements—and included a description of the tactics for employing the new munition.

For a short-range attack, a jet would launch the missile during a dive on the target. Later, pictures emerged of stand-off tests. We’ve included one of those images above. They depict the mystery weapon climbing after launch, presumably in order to gain a greater striking range before gliding toward the target.

The air force’s stand-off weapon, which the military never directly revealed to the public, influenced a parallel project in the Iranian navy. The sailing branch was disappointed with the accuracy of its old, Italian-made Sea Killer missiles, one of the main weapons of the Iranian Vosper Mk.5 frigates.

The navy briefly retired the Sea Killers but, facing a dangerous munitions shortfall, decided to upgrade the missiles instead. As originally built, the Sea Killer had a 25-kilometer range and a 50-pound warhead and relied on radar-beam-riding guidance. Following the air force’s lead, the navy tried attaching the Maverick’s TV seeker to the Sea Killer, renaming the munition Fajre Darya, or Sea Dawn.

The new missile worked. And in a killing spree between October 1986 and February 1987, three Mk.5 frigates hit at least six Iraqi merchant ships with the Sea Dawns. The pace of attacks slowed only after stocks of the new munitions ran low.

The navy tested the Sea Dawn on its SH-3 helicopters. And when the sailing branch finally showed the missile to the public in the early 1990s, it did so with a live launch from an SH-3. Many observers at the time assumed that the copter-launched weapon was actually a Chinese-made cruise missile.

They were wrong. Sea Killer was a homegrown weapon, albeit based on much foreign technology. For one thing, the presence of a booster showed that Sea Dawn was actually a sea-based weapon, not a primarily air-dropped one.

Tehran possessed a third effective anti-ship munition at the time of the 1988 fighting with the Americans—this one based on the U.S.-manufactured SM-1 Standard missile.

Standard is a dual-role weapon able to shoot down missiles and airplanes and also strike surface targets. Every other military that uses Standard deploys it solely from surface warships. But the Iranian air force integrated the missile on its F-4E fighters in order to target Iraq’s Mach-3 MiG-25s.

The missile had a comparatively weak warhead, but at Mach 2, it was fast. Its speed helped it penetrate enemy defenses. And British experiences in the Falklands War proved that even an inert missile without a warhead can sink a warship through the sheer violence of its kinetic energy.

To be clear, the U.S. Navy was by no means defenseless against these three Iranian weapons, but the 1988 skirmish probably would have turned out very differently if Tehran’s air and naval arms had fired the munitions.

They didn’t. And post-war interviews with surviving sailors of the warships Joshan and Sabalan revealed why. The Americans sank Joshan and heavily damaged Sabalan.

The Americans reported that Joshan fired a defective Harpoon missile during the fighting. But Capt. Malek, Joshan’s shipmaster, said that wasn’t true. A chief petty officer on Joshan, identified only as “B,” actually fired an SA-7 surface-to-air missile at an American MH-6 helicopter—and the U.S. Navy mistook the smoke trail as evidence of a Harpoon being launched.

In fact, Joshan was not authorized to engage U.S. Navy ships. The vessel’s orders were only to rescue survivors from the Sasan oil platform, which the Americans had bombarded. When the U.S. fleet struck Joshan, the Iranian vessel did not fire back.

“B” remembered Joshan’s last moments. “Even the 76-millimeter gun was faced against the U.S. ships and was ready to fire, but the permission never came through,” he said. “Joshan sank with her gun pointed at the Americans.”

In a debate during the 2009 presidential election, Mohsen Rezaee, commander of chief of the Islamic Republican Guard Corps during the war, explained. “We reached to his majesty [Ayatollah Khomeini] and reported the entrance of the U.S. Navy into the war. The imam smiled and said, ‘If I were you, I would take an RPG and I would hit them.’”

“We were shocked,” Rezaee said. “We explained hardship of the task and the consequences.” In fact, Iranian commanders were unwilling to fully to resist the Americans.

Their reluctance was not baseless. It became known later that Washington was prepared to massively escalate the operation in the event that Iran put up a serious fight. The U.S. Air Force planned to bomb Bandar Abbas port with 17 B-52s and supporting planes. The U.S. Marine Corps would launch amphibious assaults on Abu Mousa, Siri and Lavan islands.

Of course such actions wouldn’t have been cost-free for Washington, especially given the possibility that the Soviet Union might come to the Iranians’ aid.

But the price to Iran of fully engaging the U.S. fleet would have been proportionally much greater. It was better for Iran to withhold its best missiles … and absorb the American blows.