In 1999, One Country Figured Out How to Kill U.S. Stealth Fighters 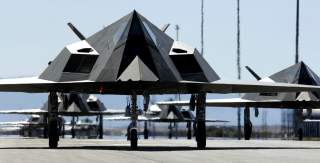