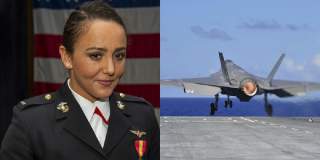 1st Lt. Catherine Stark from Erie has been selected to fly the F-35C, she is the first female U.S. Marine Corps (USMC) pilot to do so.

According to Marine Corps Times, the first female Marine F-35B pilot is about to graduate as well.

While her graduation is fast approaching Stark had her aviation wings pinned on during a ceremony aboard Naval Air Station (NAS) Kingsville, Texas, following completion of flight school on Aug. 2, 2019.

Stark has spent the past 18 months training on the T-6 Texan II and the T-45 Goshawk. She graduated from the U.S. Naval Academy with a degree in aerospace engineering was commissioned as a Marine officer in 2016, GoErie.com reported.

“Up until now they were only taking F-18 pilots that were already out in the fleet, someone with a lot of experience, and they were sending them back to school for six months and then transitioning them to the F-35,” Stark told GoErie.com in a phone interview. “But recently, they’ve been picking people right out of flight school (for the F-35). That’s been the special thing. Up until now, people fresh out of flight school with no fleet experience — like myself; I haven’t been to a squadron yet because I just finished flight school — we didn’t have the opportunity to select the F-35.”

“And I guess you could tack on that, because I’m a woman, by virtue I guess I’m the first woman picked to fly the F-35C for the Marine Corps,” she told GoErie.com. “I’ve been blessed to get picked up for the F-35 Charlie. I don’t want to downplay it, but I don’t think it’s that big of a deal.”

While the first female Marines are entering the F-35 pilot community, other female pilots have come before them.

The Marines have 86 F-35 pilots across the Corps, but are authorized to have 263, according to data obtained by Marine Corps Times through a government records request. The data is current as of February.