200,000 Tons of Diplomacy: 2 Navy Aircraft Carriers Are Making a Statement in the Mediterranean 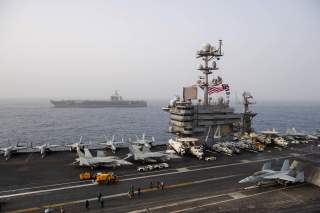 Two U.S. Navy aircraft-carrier task forces met in the middle sea for maneuvers in company with vessels and aircraft from Spain, France, and Great Britain. U.S. ambassador to Russia Jon Huntsman Jr. boarded USS Abraham Lincoln to observe the festivities. Huntsman fashioned the catchphrase for the operation, styling it “200,000 tons of diplomacy . . . cruising in the Mediterranean.” Spykman would regard the enterprise as the latest round in a struggle for maritime supremacy that dates to antiquity. Only the contestants change.

Spykman, a professor at Yale during World War II, portrayed the Mediterranean as part of a “circumferential maritime highway” made up of “marginal seas” around the Eurasian periphery. To wield global influence a marine power had to command these waters, which provided a platform for navies to project power and influence inland from the sea. Britain never could have assembled a maritime empire on which the sun never set without control of sea routes binding that empire together. The United States must likewise command the Mediterranean and fellow marginal seas—the South China Sea being another peripheral sea, dubbed by Spykman the “Asiatic Mediterranean,” that dominates headlines—to remain the world’s premier seafaring superpower. Otherwise Washington has little way to manage events in the “rimlands,” those borderlands that constitute the interface between the sea and the remote backcountry.

Look at a map. The Mediterranean is an inlet in the midsection of the colossal world island composed of Europe, Africa and Asia. This nautical thoroughfare furnishes access to North Africa, and to what Winston Churchill called Europe’s “underbelly.” Shipping can slash thousands of miles off voyages to the Indian Ocean by traversing the Suez Canal and Red Sea. And vessels can reach the Black Sea, the aquatic gateway to Russia and Central Asia, by passing through the Dardanelles and Bosporus. Ruling the Mediterranean, in other words, opens up sweeping strategic vistas. Inability to travel these waters consigns a seagoing people to irrelevance along a key stretch of Spykman’s highway.

Small wonder great-power contenders have battled for command of this waterway across the centuries. Classical Greeks wrangled incessantly over it. Romans fought three wars against Carthage, earning the right to call this body of water mare nostrum—“our sea.” The Axis chased Britain’s Royal Navy out of the middle sea for a time during World War II. Armies roaming North Africa mounted a serious landward challenge to Egypt and the Suez Canal. Meanwhile warplanes pummeled shipping attempting to navigate the narrow waist that separates the boot of Italy from the North African coast. Axis hosts never quite conquered Egypt, but the plausible threat to close the canal prompted the Royal Navy to make its exit. Shipping bound for India, the jewel in the British Empire’s crown, was compelled to detour all the way around the African landmass to reach the Indian Ocean.

That’s no way to run a maritime empire. And yet Britain was forced to it until Field Marshal Erwin Rommel’s army was defeated over the winter of 1942–1943.

During the Cold War, more to the point, the Soviet armed forces sought to erect a “blue belt of defense,” an offshore buffer against seaborne attack along the Warsaw Pact’s nautical perimeter. You might call it anti-access, Soviet style. The basic idea was to deploy surface ships in concert with shore-based aircraft and missiles to menace Western fleets that dared approach Eastern Bloc shorelines. If imposing enough, the blue belt would deter the U.S. Navy and its allies from venturing within reach, or furnish the wherewithal to clobber them if they did come. Access denial would cushion the rimlands against amphibious attack. And it would let ballistic-missile submarines skulk in offshore “bastions” unmolested, guaranteeing that Moscow would retain an invulnerable second-strike capability—the gold standard for atomic deterrence—in times of extreme crisis.

Soviet strategists considered the Eastern Mediterranean part of the blue belt. Fending off the Italy-based U.S. Sixth Fleet and NATO navies would safeguard the Warsaw Pact’s Black Sea underbelly, bolster Soviet Navy access from the Black Sea to the Mediterranean Sea, and deny Western fleets command of that segment of Spykman’s circumferential maritime highway. The blue belt of defense added up to an impressive anti-access strategy, and it worked well for a time. Soviet warships increasingly frequented Mediterranean waters under its protective aegis. And they came in numbers. During the Yom Kippur War of 1973, for instance, the Soviet Navy deployed a squadron to the Eastern Mediterranean that outnumbered the Sixth Fleet. NATO naval officialdom was gobsmacked.

Russia and its armed forces are staging a comeback following their post–Cold War interlude of economic, diplomatic, and military malaise. Russia is no superpower nowadays, and it’s doubtful the Russian arsenal will ever match its Soviet forebear. But the strategic impulse to don a blue belt of defense endures. In recent years Russian aircraft and ships have taken to harrying NATO assets that enter the Black Sea. The Russian Navy has played an increasingly active part in the Eastern Mediterranean, revivifying its naval base at Tartus, in Syria, and using naval assets to support combat operations in that strife-torn land. And on and on. Today as during the halcyon 1970s, Moscow would like nothing better than to make the Eastern Mediterranean a nautical preserve—and grant Putin and his supporters a free hand in places like Syria and Ukraine.

Is such a clean outcome likely? No. Think of interactions in the middle sea as part of an armed conversation whereby the contenders move forces around to make statements about relative power and martial prowess. A challenge-and-reply dynamic typifies power politics. The protagonists strive to mold others’ perceptions to their advantage, casting themselves as powerful and resolute and potential foes as feeble and irresolute. Such branding efforts play on human nature. People and societies admire and rally to likely winners while shunning likely losers. It only makes sense for established and would-be great powers to posture themselves as winners and prospective antagonists as losers. In so doing a competitor can deter or coerce rivals while beckoning supporters to its cause.

Suppose Moscow could convince foreign audiences it would make the Mediterranean’s eastern reaches a Russian lake in wartime, expelling NATO navies from embattled seaways. If so, then NATO governments might tacitly cede control in peacetime and steer clear in wartime. Putin would have that free hand. Non-NATO powers might acquiesce grudgingly in Moscow’s bidding. They might even flock to the Russian tricolor as allies.

If its recent military moves and provocations comprise Moscow’s challenge, then think of countermoves such as operating two carrier strike groups in the Mediterranean Sea alongside allied forces as NATO’s riposte. Western navies are announcing not just that they can operate within the Russian defensive belt but that they feel confident dispatching their most precious assets—nuclear-powered carriers like Abraham Lincoln and John C. Stennis—to prowl the contested zone.

This week’s operations, then, were a statement game, the statement being that Western allies will not surrender the middle sea, and with it their claim to maritime primacy. It doesn’t take a Nicholas Spykman to foretell what the coming months and years hold: new rounds of this warlike conversation about who would be the victors and vanquished should sea combat ensue. It behooves Western statesmen and commanders to couch military and fleet maneuvers in those terms. This week’s exercise made a good start.

At times martial diplomacy is like talking smack on the playground—that lawless, hardscrabble realm where the strong do as they will, the weak suffer what they must, and everyone jockeys to be among the strong. But such is the nature of the geopolitical game.

James Holmes holds the J. C. Wylie Chair of Maritime Strategy at the Naval War College. The views voiced here are his alone.