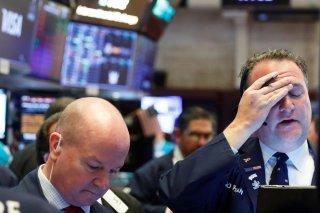 With the new coronavirus still spreading rapidly, the shock to the global economy is becoming ever more apparent. I’ve been comparing the different major economies, and how this relates to the great financial crisis (GFC) of 2007-09.

World stock markets are currently down by about 25% from their January highs, having recovered a little since the US government unveiled its US$2 trillion (£1.6 trillion) economic relief package. This remains the markets’ fastest decline in history – but how does it compare in scale to 2007-09?

In the four weeks from mid-February to mid-March, the stock markets of the G7 countries fell by about 33%, compared with 55% during the worst 18-month period of 2007-09. The leading markets still have to fall some way to outdo the previous crisis, though this varies considerably between countries. China’s main market, the SSE Composite Index, fell by about 97% in the year ended October 2008, but only about 15% this time – despite the pandemic starting there.

But this compares a short 2020 period with a much longer period during the previous crisis. A more reasonable comparison of the COVID-19 crash might be with the four weeks after the Lehman Brothers collapse of September 15 2008. On that basis, it’s a COVID-19 fall of 33% against 19% after Lehman. (On this comparison, China’s performance was actually worse in 2020, since its market flatlined for two months after Lehman.)

Fall in stock markets post-Lehman vs 2020

The shock to the world economy in 2020 is quite different, since the lockdowns have severely hampered everything from manufacturing to services. In 2007-09, the problem was a banking crisis as a result of too much bad debt, and there was no equivalent crisis on what economists call the supply side of the economy.

Nonetheless, the COVID-19 pandemic is having knock-on effects that are showing some similarities with the previous crisis. The credit markets have frozen and corporate bonds have plunged in value: the gap or spread between corporate bond yields and those of the benchmark ten-year US government bond has now widened more than during 2007-09.

The best realistic economic outcome is probably a recession no deeper than last time, where GDP fell 1.7% in 2009. It could yet be a lot worse, however. According to this paper, led by distinguished Australian economist Warwick McKibbin, the G7 plus China could be heading for an average decline of 8% of GDP this year, including 6% in the UK, 8% in the US and 9% in Germany.

The good news is that they assumed that 30% of the Chinese population got infected. In the month since the paper was published, the pandemic seems not to be turning out as badly in China. On the other hand, the US and Europe could be heading towards the gloomier end of expectations.

Another leading economist, Pierre-Olivier Gourinchas, predicts a 10% decline in world GDP if economic activity halves for a month and then spends a further two months at three-quarters the norm.

However the figures turn out, the economic outcome of COVID-19 seems arguably worse than 2007-09 because of such severe collapse in such a short time. If a significant amount of income is held up for even six months, it will drive a number of firms into effective insolvency, with consequences for everything from employment to bad debts on bank balance sheets.

No wonder the world’s leading economies have been unveiling economic relief packages. When I compare these with the last crisis, it reveals the scale of the economic problem: the average package by the G7 countries is 4.4 times bigger than last time.

At the other end of the spectrum are Canada and Japan. These two countries look to be at different stages in the pandemic: Canada is only 16 days after its 100th case, whereas Japan is 35 days from that point. They could also be on different trajectories, with Canada reporting 24 new deaths on March 30 compared to Japan’s two, taking their totals to 89 and 56 respectively.

The most noteworthy relief package is that of the US, which is only 1.9 times bigger than in 2008 – that’s 10% of GDP compared to 5.3% of GDP last time. In such a huge relief package, there might be economies of scale. Nonetheless, the US response is arguably too small compared to other countries at similar stages of the pandemic, such as the UK, Germany and also France.

Relief packages as a % of GDP

Also notice China. Just like the Chinese stock market has reacted more coolly than its western rivals, Beijing’s economic relief package is ten times smaller than in 2008. Considering China has been at the epicentre of the pandemic, and industrial output declined by an estimated 13% in the first two months of lockdown, you might have expected the government to fire a comparable bazooka to Germany or the UK.

Time will tell if this is the right move. Perhaps China’s strict lockdown measures have made such spending unnecessary, especially in a country probably big enough to make up for an economic problem centred on one province. With Chinese manufacturing having rebounded strongly in March, it will be interesting to compare the overall effect of the coronavirus on the world’s leading economies a year or two in the future.