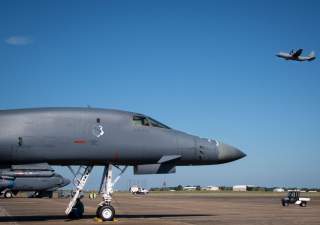 The B-1s then flew over the Korean Peninsula where they were joined by four Republic of Korea Air Force (ROKAF) F-15 fighter jets.

In response to North Korea’s ballistic missile and nuclear programs and as a part of the continuing demonstration of ironclad U.S. commitment to its allies, two U.S. Air Force (USAF) B-1B Lancer bombers under the command of U.S. Pacific Air Forces (PACAF), joined their counterparts from the Republic of Korea and Japanese air forces in a sequenced bilateral missions on Jul. 29, 2017.

According to a PACAF news release, this mission is in direct response to North Korea’s escalatory launch of intercontinental ballistic missiles (ICBMs) on Jul. 3 and Jul. 28.

“North Korea remains the most urgent threat to regional stability,” said Gen. Terrence J. O’Shaughnessy, PACAF commander. “Diplomacy remains the lead; however, we have a responsibility to our allies and our nation to showcase our unwavering commitment while planning for the worst-case scenario. If called upon, we are ready to respond with rapid, lethal, and overwhelming force at a time and place of our choosing.”

Noteworthy after taking off from Andersen Air Force Base (AFB), Guam, the B-1s flew to Japanese airspace, where they were joined by two Koku Jieitai (Japan Air Self Defense Force) F-2 fighter jets.

The B-1s then flew over the Korean Peninsula where they were joined by four Republic of Korea Air Force (ROKAF) F-15 fighter jets. The B-1s then performed a low-pass over Osan Air Base, South Korea, before leaving South Korean airspace and returning to Guam.

Throughout the approximately 10-hour mission, the aircrews practiced intercept and formation training, enabling them to improve their combined capabilities and tactical skills, while also strengthening the long standing military-to-military relationships in the Indo-Asia-Pacific region.

U.S. Pacific Command maintains flexible bomber and fighter capabilities in the Indo-Asia-Pacific theater, retaining the ability to quickly respond to any regional threat in order to defend the U.S. homeland and in support of U.S. allies.