By 2030, These Russian Weapons Will Be Second To None 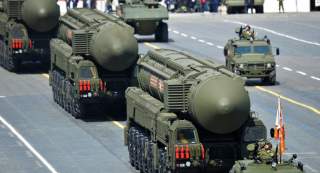 Key point: Russia is a leader in many military technologies.

Russia’s military is on the brink of transformation—or not. The Russian government has big plans for revamping its forces, planning to replace 70 percent of its equipment by 2020. New fighters, bombers, aircraft carriers, destroyers and nuclear weapons would flow to the Russian Armed Forces, boosting their ability to protect their borders and operate in the “near abroad” of the former Soviet socialist republics, and in farther-away locations such as Syria.

Those plans, spurred by high oil prices and a booming Russian economy, have since fallen apart, due to falling oil prices and Western-imposed sanctions. Still, a number of intriguing projects are sitting on the drawing table and could enter service by 2030 if things turn around.

In recent years Russia has put its ICBMs on the road, trading silos for mobile launchers that patrol the ample Russian countryside. The latest of these is the RS-24 Yars. Entering service in 2010, Yars is equipped with four multiple independently targetable—and maneuverable—reentry vehicles, each packing a 150-to-250-kiloton warhead. (For comparison’s sake, the bomb dropped on Hiroshima was about fifteen to eighteen kilotons.)

The Yars missile has a reported range of 6,800 miles, making it capable of striking any point in the United States, Alaska and Hawaii. The missile uses GLONASS—Russia’s version of the GPS satellite navigation network—and inertial navigation to achieve a circular error probable of 250 meters, meaning half of its warheads will land within a 250-meter-radius circle. This high degree of accuracy makes Yars a dangerous first-strike weapon.

Russia’s first fifth-generation fighter, PAK-FA is a joint project with India to produce a large,  stealthy multirole fighter for both countries. The fighter is being developed by the legendary Sukhoi aviation bureau, responsible for many of the Soviet Union’s most famous and effective designs.

PAK-FA will have an active electronically scanned array radar to track and shoot down aerial targets, and electro-optical sensor for use against ground targets. It will carry up to six air-to-air and air-to-ground missiles in an internal weapons bay. The airframe will be powered by two “izdeliye 30” engines in the forty-thousand-pound class, a new design that will finally offer an alternative to the Saturn series. The combination of raw engine power, thrust vectoring and all-moving tail surfaces will make for a highly maneuverable fighter—and dangerous potential opponent for the West.

Russia’s only aircraft carrier, Admiral Kuznetsov, is old, unreliable and need of retirement. Fortunately, a potential replacement is currently on the drawing boards of Russia’s Krylov Shipbuilding Research Institute. Known as Project 23000E Storm, the new ship would be 1,082 feet long and displace one hundred thousand tons, making it 60 percent larger than Kuznetsov. It would cruise at thirty knots and use an electromagnetic aircraft launching system, all powered by nuclear power plants.

Storm’s air wing would consist of seventy to ninety aircraft, including fighters, attack jets, airborne early warning, electronic warfare and reconnaissance aircraft. It would embark at least a dozen antisubmarine warfare and utility helicopters. For last-ditch defense, the hypothetical carrier design would have close-in weapons systems, antisubmarine weapons, and missile and torpedo decoys. While completing such a ship would be extremely difficult for Russia—the country has no experience in actually building carriers—Moscow has little choice but to do so if it wants to remain a major sea power.

Storm, if it is ever built, will need escorts capable of defending it from attack. Project 23560 Leader, another Krylov Institute project, will be a large, and very capable, guided-missile destroyer that will replace existing Russian cruisers and destroyers.

Leader will be very large, 652 feet long and displacing 17,500 tons. It will be an multipurpose destroyer capable of anti-surface, antisubmarine, anti–ballistic missile, and antiair warfare. It will have nearly two hundred missiles, divided into sixty antiship cruise missiles and 128 antiaircraft missiles. The antiship missiles are expected to be the new Zircon antiship missile, with air defense provided by the new S-500 missile.

Russia expects to start building the first Leader destroyer in 2019, and the U.S. Navy believes eleven more will follow.

First used in action against Islamic State, the Raduga Kh-101 is Russia’s newest cruise missile. The Kh-101 combines a terrain-hugging flight profile, stealthy design, and the longest range of any known missile into an especially lethal package.

The missile is large, 24.4 feet long and with a launch weight of 5,060 pounds. A turbofan engine propels the missile at high subsonic speeds, thought to be around .77 Mach. It has an 880-pound warhead—twice as powerful as its predecessor, and using GLONASS is claimed to be accurate to within thirty feet.

The truly remarkable thing about the Kh-101 is its range. The missile can strike targets three thousand miles away, and may even have a true range of six thousand miles. A nuclear version exists that carries a 250-kiloton nuclear warhead.

Kyle Mizokami is a defense and national security writer based in San Francisco who has appeared in the Diplomat, Foreign Policy, War is Boring and the Daily Beast. In 2009 he cofounded the defense and security blog Japan Security Watch. You can follow him on Twitter: @KyleMizokami. This first appeared several years go.