23 Nations Want the U.S. Military’s Extra Humvees – But Can’t Get Them 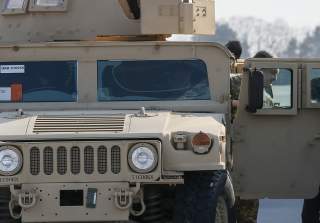 The U.S. military’s Humvees sure are popular overseas – especially when they come for free.

Some 23 nations requested 16,005 surplus Humvees from 2012 to 2018, according to a Government Accountability Office (GAO) report. The Middle East and Africa comprised 75 percent of demand.

But wanting is not the same as having. The Pentagon approved the transfer of just 7,612 vehicles – of which only 3,812 were delivered, or around one-quarter of the vehicle requested.

In theory, the Excess Defense Articles program, or EDA, is supposed to be a win-win: the U.S. gets rid of surplus equipment that costs money to store, and buys friendship with allies and potential allies. It’s also a nice bit of salesmanship: free Humvees might entice customers, some of whom are accustomed to Russian equipment, to buy more American weapons. For foreign nations who don’t have the money for new equipment, it’s a way to get ever-useful Humvees for missions like battling guerrillas and terrorists.

So what’s the problem? For starters, the U.S. Congress added a provision to the Fiscal Year 2018 National Defense Authorization Act that mandates Humvees to be modernized before transfer – with the foreign buyers responsible for picking up the cost. The provision requires Humvees “to be modernized with an armored or armor-capable crew compartment and new, modernized powertrain prior to transferring,” GAO said. “The corresponding conference report stated the conferees’ expectation that any modernization and refurbishment work must generally be done at no cost to DOD. According to DOD, the cost to modernize would be incurred by the requesting foreign government. Since the provision’s enactment, DOD has not exercised the authority to waive this legislative requirement for any Humvee request.”

“Foreign governments have not been willing to pay for the modernization, so approvals have halted,” GAO added.

Any like any smart consumer shopping for a used car, overseas buyers are cautious. “Foreign governments desired newer Humvee models rather than older models that were being offered or did not want to incur expenses to repair the EDA Humvees to an operational state,” noted the report.

In addition, the State Department’s Defense Security Cooperation Agency (DSCA), which approves arms sales, has not authorized any EDA Humvee transfers since 2017. This was partly because vehicles weren’t always available, or foreign nations didn’t always qualify for the program.

But the most significant obstacle to transfers of excess Humvees has been a requirement that EDA transfers not harm the U.S. defense industrial base. Not surprisingly, that’s exactly what Humvee manufacturer AM General has argued. “In total, the Humvee manufacturer has challenged 11 transfer requests for over 4,000 vehicles between fiscal years 2015 and 2018,” GAO reported. “The manufacturer told us that the increasing number of proposed transfers is concerning because the transfers amount to nearly 3 years’ worth of new vehicles it could produce to sustain its production lines.”

“AM General representatives told us they will continue to object to the transfer of older Humvee vehicles (M900 and M1000 models),” said GAO. “For these models, the representatives citied concerns that parts for these vehicles are no longer in production, and thus the manufacturer cannot ensure qualified parts are available for maintenance and repairs. They are also concerned that older vehicles have the propensity to break down, which could damage the Humvee brand internationally—particularly, if counterfeit parts are used.”

While the production of the M900 and M1000 Humvee models has ended, AM General still makes the M1100, which is fielded by the U.S. military and other nations. The M1100 is the only Humvee model that can support the Congressional requirement for additional armor protection.

Just like the World War II-era jeep, the 4-ton Humvee – first introduced in the 1980s – has become an icon. There are 300,000 Humvees operated by the U.S. military and foreign governments, plus another 11,000 Hummer H1 civilian models built between 1992 to 2006, according to GAO. The U.S. intends to replace many of its Humvees with the Joint Light Tactical Vehicle from manufacturer Oshkosh, though it may also continue to field Humvees at the same time.