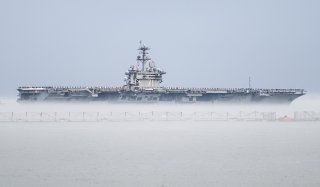 After sailors aboard the U.S. Navy aircraft carrier USS Theodore Roosevelt (CVN-71) tested positive for COVID-19 this week the ship has been directed to pull into Guam to test the entire crew, Acting Navy Secretary Thomas Modly told reporters at a Pentagon press briefing on Thursday.

This marked the first time that infections have been detected aboard a U.S. Navy ship at sea.

Initial reports suggested that eight sailors on board had been infected with the coronavirus, but The Wall Street Journal reported that 23 sailors had tested positive.

The crew will remain at the pier as testing for COVID-19 is conducted. The testing of the crew will be consistent with the Center for Disease Control guidelines and will be conducted as quickly as possible. The decision was made to head to Guam, as the resources at the naval medical facilities on the U.S. island territory in Micronesia, in the Western Pacific would allow for more effective testing, isolation and treatment of sailors as deemed necessary.

"No one on the crew will be allowed to leave anywhere into Guam other than pierside," Modly told reporters according The San Diego Union-Tribune.

As noted, base access will be limited to the pier, while no base or regional personnel will be given access to the pier to reduce the potential spread of coronavirus. There are two different kinds of tests that the Navy could perform on the sailors including the more effective nasal swab, which can positively diagnose a patient. However, testing kits have been available in very limited quantities in the United States and it is unclear how many of those kits the U.S. Navy may have on hand.

As a result, it is likely that the Navy will instead conduct surveillance testing, where a sample is tested for a range of flu-like viruses whereby different diseases can be ruled out. This testing may be used to narrow down which sailors may need the more specific COVID-19 nasal swap.

The USS Theodore Roosevelt has been operating in the Philippine Sea and had visited Vietnam earlier this month, becoming only the second U.S. aircraft carrier to make a port call there since the fall of Saigon in 1975. The carrier was accompanied by the guided-missile cruiser USS Bunker Hill when it visited the port of Da Nang.

It isn't known if that port visit was the source of the infection. Navy officials have noted that crew come and go frequently while the carrier is at sea.

Vietnam has also been aggressive in combating COVID-19 and had sent tens of thousands of people to quarantine camps after its citizens abroad returned home from Europe and the United States to escape other outbreaks. However, last week a 41-year-old American tourist, who had been traveling in Europe and Asia and visited eight different countries, tested positive for coronavirus in the Vietnamese coastal city of Da Nang. He was the country's 68th COVID-19 patient.

Thursday also marked the largest one-day jump in confirmed cases of COVID-19 in the U.S. Navy with 30 more sailors testing positive. This included two on a San Diego-based ship.