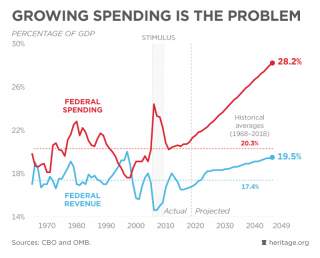 “The most significant threat to our national security is our debt.”

That’s what Adm. Michael Mullen said in 2010. Back then, Mullen was chairman of the Joint Chiefs of Staff. And the federal debt totaled $13 trillion.

Now, nine years later, the debt is on the verge of reaching $23 trillion. To make matters worse, the nonpartisan Congressional Budget Office expects annual deficits of $1 trillion starting with the current fiscal year and continuing for at least the next 30 years. This will be the case even without a recession, a major war, or the addition of unrealistic new programs.

Mullen’s 2010 warning did not imply that debt would sink the country the next day. Perhaps that’s why our political leaders have largely ignored this threat. But that reckless mindset endangers our security and prosperity. It is urgent that lawmakers rein in the debt before it is too late.

Our deteriorating fiscal position is one of very few challenges large enough to threaten ruin for the United States. And it threatens on two fronts.

First, as the national debt grows, so too will interest payments on the debt. These payments are growing far faster than our total economy, increasing drag on economic growth. America’s economic might was crucial to defeating the axis powers in World War II and to outlasting the USSR during the Cold War. Slow (or no) economic growth means fewer resources are available to ensure national security.

Second, the lack of responsible budgeting threatens to crowd out needed funding for national defense.  As interest payments and non-defense programs further dominate federal spending, pressure rises to restrain overall spending by slashing the military budget. For example, a recent New York Times article called for going after defense activities to (partially) fund an expansion of the Medicare program.

Out-of-control spending is the root of the problem. In contrast to media reports blaming today’s deficits on the 2017 tax cut, the reality is that federal tax revenue is close to the historical average and expected to rise. In contrast, spending is already well above average (especially outside of major war or severe recession), and will soon reach levels not seen since World War II.

The surge comes from many directions, including spending limit “deals” to grease the skids for annual appropriations and unchecked adjustments (such as often-questionable “emergency” spending) to the limits.

However, the largest factor by far is entitlement programs such as Social Security, Medicare, and Medicaid. These programs will account for two-thirds of the expected spending increase over the next decade. The vast majority of Americans receive more in benefits from programs such as Social Security and Medicare than they paid in lifetime payroll taxes, which means that without reforms, younger workers would face much higher taxes to keep these programs solvent.

Despite the $23 trillion federal debt and the enormous challenge to reform Social Security and Medicare, there is a solution to America’s fiscal problems. The Heritage Foundation’s Blueprint for Balance contains hundreds of policy ideas. The plan covers taxes, national defense, major entitlements, wasteful programs, welfare program reforms, and much more.

Yet merely having a plan is only a first step towards solving the problem.

Enacting the plan will require political leadership and courage that has been sorely lacking from both parties. Most politicians want to avoid making difficult choices on taxes and spending; it’s easier to just pile up debt. Until they face political consequences for doing so, they will keep passing the bill for today’s bloated government on to future generations.

Members of the public can arm themselves with cold, hard facts by turning to another Heritage Foundation resource: www.FederalBudgetInPictures.com, which presents vital, up-to-date information through streamlined graphics.

It is time to stop shirking responsibility and tackle the debt head-on. America’s economy, national defense and children are depending on it.

David Ditch is a research associate in The Heritage Foundation’s Grover M. Hermann Center for the Federal Budget.