At $23 Trillion, the U.S. National Debt Already Exceeds the Size of the U.S. Economy 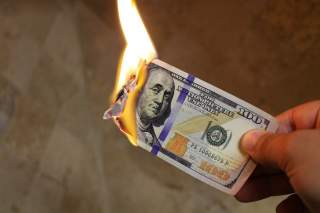 Remember the last time the deficit hit $1 trillion? It was 2012, and the country was just beginning to climb out of the worst recession in decades.

That’s nothing to celebrate. In fact, it’s dangerous. At $23 trillion, the national debt already exceeds the size of the U.S. economy. This year’s deficit simply pours more gasoline on an already raging fiscal fire.

The situation is actually far worse than most people realize. That $23 trillion figure  fails to account for massive unfunded obligations facing the U.S. government through programs such as Social Security and Medicare.. This so-called fiscal gap, which measures the difference between projected revenues and spending over the long-run, threatens future generations with ten times the current debt burden.

All of this is happening while America is experiencing one of the longest economic expansions in the country’s history with unemployment at historic lows, wages rising (especially for those with lower incomes), and an economy that continues growing and expanding despite headwinds.

That’s exactly the problem. It is simply unprecedented for the American nation to shoulder such high levels of deficits and debt at a time of relative peace and economic prosperity.

Way back in the 1960s, economist Milton Friedman wryly observed, "We are all Keynesians now." But even John Maynard Keynes wouldn’t have countenanced today’s deficit spending. According to Keynes, governments should be accumulating surpluses during economic boom times to help counteract business cycle contractions—not expand government spending, regardless of season. The latter is a recipe for fiscal collapse.

The Congressional Budget Office tends to focus on yet another measure of our current debt burden: publicly held debt. This refers exclusively to debt borrowed in credit markets; it excludes intragovernmental debt, which represents debt to Social Security beneficiaries, military veterans, and others.

However, old-age programs like Social Security and Medicare, along with pensions and other health care, represent the biggest drivers of unfunded obligations. These entitlements are growing faster than working Americans’ ability to finance them. Growing benefit spending is the core driver of America’s deficits and debt.

No matter, how one squares the numbers, they all tell the same story. The U.S. fiscal situation is highly unsustainable and points toward a fiscal crisis in the making.

By 2050, debt borrowed in credit markets is projected to reach 180 percent of gross domestic product (GDP). That’s far higher than the U.S. has ever experienced, and it won’t stop rising there.. Greece experienced its debt crisis when its debt hit that same, 180 percent mark. It raises the question: who would bail the U.S. out?

A full-fledged fiscal crisis isn’t the only thing we need to worry about, however.

Federal debt that’s too high and rising compromises income growth, leaving us all poorer. It increases interest payments that crowd out spending on other priorities. It exerts pressure on interest rates across the economy, including for mortgages and auto loans. It weakens our nation’s ability to respond to the next recession or emergency by leaving little fiscal space when it’s most needed. And it imposes an unfair burden on future generations, imperiling the American Dream

Washington’s profligacy and lack of a credible commitment to fiscal responsibility also threatens the country’s valuable status as the supplier of the world’s primary reserve currency: the U.S. dollar. While financial markets are not yet showing signs of concern, they may be underpricing the real risks for lack of suitable alternatives to stash away cash in relatively safe assets.

In a 2010 National Tax Journal paper, Leonard E. Berman et al. argue that the worldwide market for government securities may be of a winner-take-all nature, which could generate a bubble with sudden and severe implications for interest rates should said bubble burst:

“[One] possibility that could create bubble-like behavior is if the safest asset, currently U.S. government securities, can secure an almost limitless supply of cheap capital, while the next most safe asset trades at a substantial risk premium. Volatility in world markets, even if it makes Treasury bonds less safe, raises the risk premium even more — increasing the flow of capital to the United States and further depressing interest rates. This would explain why Treasury yields plummeted even as the U.S. financial sector was teetering on the brink of collapse and the economy was heading into a deep recession, and it would be consistent with the further decline in U.S. interest rates when Greece and other Euro-zone countries experienced debt crises.”

Washington is playing with fire.

Romina Boccia is the director of The Heritage Foundation’s Grover M. Hermann Center for the Federal Budget.