2,300 Years of Terror: Why You Don't Want to Fight an Elephant in a War 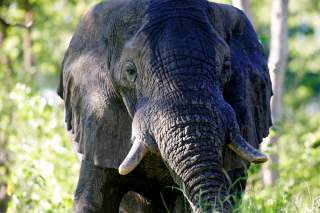 Elephants were the tanks of the ancient battlefield.

An elephant charging into a group of soldiers or horses could decimate a formation. That’s assuming the sheer psychological impact of watching a giant war beast with pointy tusks—charging and shrieking like murder incarnate—didn’t first cause the opposing force to flee in terror.

They could smash fortifications, impale people on their tusks, and stomp people to death under their huge feet and enormous weight. They towered over the battlefield.

In addition to their brute strength and the inherent psychological impact on the enemy, elephants were incredibly useful for logistics. They’re also highly intelligent.

As recently as 2004, the U.S. Army even classed elephants as a pack animal, though also warned—in a field manual distributed to Special Operations Forces—that the giant herbivores “should not be used by U.S. military personnel” due to their endangered status and the inherent dangers in riding them.

But for 2,300 years, armies have used elephants to help fight wars. They have used the animals for fighting, hauling heavy equipment or working on construction projects. Elephants have a long and distinguished military career, from ancient conquests to well into the modern era.

If there was one ancient general who was the most instrumental in the spread of elephants as a weapon of war, it was probably Alexander the Great.

The ancient king first encountered elephants during his conquest of Persia in the 2nd century BCE (Before the Common Era). Alexander was able to skillfully defeat the Persians and their elephants, but was nonetheless mesmerized by the terrifying beasts. He took the Persian elephants that survived the campaign—and attempted to build an army of his own elephants.

Alexander was always on the march, so he never had time to truly train his elephants into an effective combat force. Instead, he used them mostly for their logistical prowess and for the powerful psychological impact they had on their the enemies.

This began to change as Alexander marched into India and clashed with the elephant-equipped forces of King Porus of Paruava. Here Alexander saw what fully-trained war elephants could do in combat. His spear-armed troops fought them off by organizing into tight ranks—like a porcupine—but they did so at a terrible price.

After Alexander died and his kingdom splintered, an elephant arms raceensued throughout the ancient world. The animals served as a potent symbol of an army’s wealth, status and power. But as future campaigns would reveal, they also had their weaknesses.

More than a century later, Hannibal of Carthage led his daring march across the Alps with an army of elephants. Hannibal, one of antiquity’s most celebrated generals, hoped to meet his Roman enemies head on with his war beasts. Ironically—as Hannibal is famous for it—this feat turned into a major blunder.

Elephants, not historically known for living in cold, high-altitude environments, proved ill-suited to the task of scaling the Alps. Many died crossing the mountains. Even the ones who survived the trek came out famished, exhausted and sick. When Hannibal met the Romans in combat at the Battle of Zama, the elephants proved ineffective.

To make matters worse for Hannibal, the Romans had developed anti-elephant tactics learned after earlier campaigns against the Greek kingdom of Espirus.

Hannibal lined his elephants up in front of his army—a screening force except with six-ton, man-crushing animals. The Roman general Scipio Africanus responded by creating gaps in his lines. When the elephants charged, the Romans funneled them through these open gaps, and dispatched them in Scipio’s rear.

The Romans also outmaneuvered Hannibal’s elephants with javelin-throwing troops, and mounted spikes on their wagons in order to wound the animals. The Romans also set fires to frighten them away.

For one, when put under extreme stress, elephants can become unruly and difficult to control. Some of the more aggressive male elephants would sometimes pick fights with each other, causing major disruptions to operations as well as putting friendly troops around them at risk.

After Hannibal, the Romans adopted elephants—poetically so—during their campaign to conquer the late Alexander’s kingdom of Macedonia. Yet the golden age of the war elephants was coming to an end, at least in Europe.

Elephants saw infrequent use during the Middle Ages. The Frankish king Charlemagne owned an Asian elephant named Abdul-Abbas—given to him by Harun Al Rashid, the caliph of Baghdad. This unfortunate pet met his end while marching north with his master during a war against King Godofrid of Denmark. Historians still debate whether Charlemagne actually intended to use Abdul-Abbas in battle or whether he was there as a status symbol.

Elephants were more common in Asia, where the Khmer fielded them to great effect during their 12th century conquest of the Chams. The Mongols encountered many elephants as they marched into southeast Asia—outmaneuvering them with archers in a manner similar to Roman javelins.

The advent of gunpowder made elephants even more of a rarity on the battlefield—as they became vulnerable to deadly musket volleys. But in the late 19th century, the Siamese army used the elephants against French colonial troops, sometimes even mounting musketeers on the elephants’ backs.

But elephants no longer had the same effect they once did. As the world became introduced to industrialized warfare in the form of machine guns, armored vehicles and chemical weapons, elephants suddenly didn’t seem so scary.

But that’s not to say that the armies of the world no longer had any use for their beasts of burden.

Though the days of elephant offensive operations were over, elephants still proved useful in logistics and in support functions as pack animals. During World War I, armies pressed a few circus elephants into service to haul heavy equipment and artillery.

However, it was during World War II that a man named James Howard “Elephant Bill” William would show the world what elephants could do.

William was a British World War I veteran and infantry officer who supervised mules and camels while in the service. After the war, he moved to Burma and worked at the Bombay Burmah Trading Company, and became a supervisor of the company’s elephants, working to transport heavy goods and supplies through the jungle.

After the Japanese invasion and Allied retreat from Burma, William volunteered his services to the Allies, and became an adviser to the Royal Indian Engineers. His experience with elephants, and his fluent Burmese made him a valuable asset.

Elephants proved incredibly useful. Both Allied and Japanese forces fielded elephants in large numbers. They were able to move with relative ease through thick jungles—and could cross rivers that would otherwise mire vehicles.

As a result, elephants were instrumental in quickly moving heavy equipment and timber for construction projects. Elephants helped build bridges and roads necessary to move tanks and armored vehicles to the front.

Outside the jungle, the U.S. Army Air Corps used elephants at airfields in India. These animals hauled freight and helped load airplanes before their arduous journey across the Himalayas. In one case, the Americans even made use of elephants to conduct a salvage operation to reach a plane that crashed deep in a thick jungle, with a scout plane in the sky relaying instructions to elephant-mounted troops on the ground.

“They built hundreds of bridges for us, they helped to build and launch more ships for us than Helen ever did for Greece,” Slim wrote. “Without them our retreat from Burma would have been even more arduous and our advance to its liberation slower and more difficult.”

But by far, the most famous individual elephant of the campaign was Lin Wang—an elephant who served on both sides of the war.

Lin Wang started his service as a pack animal for an Imperial Japanese Army unit. In 1943, Nationalist Chinese forces under the legendary Gen. Sun Liren captured Lin Wang, conscripting him and several other elephants into hauling supplies.

Lin Wang served under Sun for years. Chinese forces brought the animal across Burma to China—along with several other elephants—for use in construction projects. In 1947, Sun went to Taiwan, and brought the remaining three elephants with him, including Lin Wang.

The other two died of illness, and in 1952, the Nationalist army gave Lin Wang to the Taipei Zoo where he lived until 2003, dying at age 86.

The 1960s were the last time elephants were widely used in war.

Rebels employed elephants along the Ho Chi Minh trail—first by the Vietminh during the French Indochina War and later by both North Vietnamese Army and Viet Cong forces throughout the Vietnam War—to move heavy ammunition and supplies.

During early stages of the war, South Vietnamese units occasionally used elephants in counter-guerrilla patrols, or would hire local elephant handlers to help them cross deep rivers or haul heavy equipment when conventional transport was unavailable.

One of the most bizarre military operations involving elephants was Operation Bahroom, when a group of U.S. commandos facilitated the air drop of two elephants from a CH-53 helicopter in 1968. The elephants were for a local tribe in Vietnam’s Central Highlands that needed the animals for farm tasks. Yes, the Danny Glover and Ray Liotta movie Operation Dumb Drop is based on a true story. I’ll give you a moment to process that.