24 Hours Or Less: Nowhere On Earth Is Safe From America's F-22 Raptors 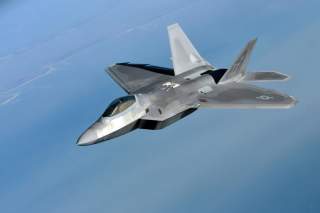 Key point: Should the need to attack emerge suddenly in a particular part of the world, a small continent of F-22s will be able to get there.

The Air Force is strengthening its “Rapid Raptor” program designed to fast-track four F-22s to war - anywhere in the world - within 24 hours, on a moments notice, should there be an immediate need for attacks in today’s pressured, fast-moving global threat environment.

Readiness for the F-22, senior Air Force officials explain, hinges upon a new software delivery strategy which sees incremental improvements less as “products” for pre-planned, spread apart adjustments -- but rather a steady continuous “pipeline” of upgrades.

“When it comes to software, none of the old rules apply. It is a service and a pipeline today. We have to develop software differently. With the F-22, there has been a shift from a traditional acquisition program into a continuous stream of delivery,” William Roper, Assistant Secretary of the Air Force, Acquisition, Technology & Logistics, told an audience recently at an Air Force Association Symposium.

As part of this “agile acquisition” program focused on software, the Air Force has validated two new weapons for the F-22. This F-22 progress is grounded upon the premise that hardware configurations, air frames, weapons’ racks and sensors - can all be changed with upgrades with software.

This faster-paced software-driven strategy is intended to reinforce programs like the “Rapid Raptor” program to ensure that deployed F-22s operate at an optimal level of lethality.

The Raptor is, by design, engineered to fly in tandem with fourth-generation fighters such as an F-15 or F-18, to not only pave the way for further attacks but also to use its longer-range sensors to hand off targets to 4th gen planes for follow-on attacks.

Rapid Raptor was originally developed by Air Force Pacific Command and has since been expanded to a global sphere by Air Combat Command, service officials said.

“The ACC Rapid Raptor program’s aim is to take the concept, as developed in PACAF, and change it from a theater specific to a worldwide capability.” an Air Combat Command spokeswoman told Warrior Maven in a written statement last year.

As part of the Rapid Raptor concept, ACC F-22s forward deployed to Europe in 2015 and 2016. Using the Rapid Raptor program for Europe is, in many respects, entirely consistent with the Pentagon’s broader European posture; for many years now, DoD and NATO have been positioning deterrence-oriented forces throughout the European continent as well conducting numerous allied “solidarity” or “interoperability” exercises.

Apart from demonstrating force as a counterbalance to Russian posturing, these activities are also part of a decided strategic effort to demonstrate “mobility” and rapid deployability.

Therefore, so while Air Force officials are careful to say the Rapid Raptor, as a concept does, not “target” any specific nation, its utilization in Europe is indeed of great relevance given existing tensions with Russia.

Accordingly, should the need to attack emerge suddenly in a particular part of the world, a small continent of F-22s will be able to get there. The point here, it seems clear, is that recent global combat circumstances have further reinforced the importance of the F-22s ground attack or close-air-support ability.

Of course, historically, many most immediately think of the F-22 in terms of its speed, maneuverability and dogfighting advantage as an air supremacy fighter, yet its recent air to ground attacks in Iraq and Afghanistan have fortified its role in an air-to-ground fight.

While the F-22 is by no means intended to function as an A-10 would in a close-in ground fight persay, it does have a 20mm cannon which has been used in ground attacks against ISIS, officials familiar with the war effort say.

In recent years, the F-22 conducted a successful ground attack against a Taliban facility in Afghanistan, news reports and officials familiar with the attack said.

To support these kinds of mission options, the F-22 weapons compliment includes ground-specific attack weapons such as Joint Direct Attack Munitions – such as the GBU 32 and GBU 39 -- and the Small Diameter Bomb.

Some background portions of this story first appeared two years ago.