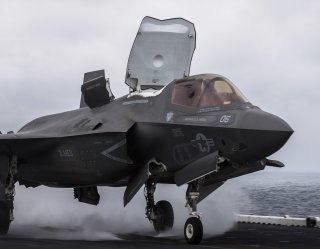 The F-35, also referred to as the Joint Strike Fighter, has been touted as the most lethal and versatile aircraft of the modern era – but with a price tag well over $1.5 trillion for the program, it is one of the most expensive. A few points need to be put into perspective when noting that price.

First, there is the fact that this is for 3,000 aircraft, and that those planes could be flying well into the 2070s – or roughly 50 years from now. So is the cost really worth it?

"Like everything in life, it is a matter of opinion," said Brad Curran, industry principal for Aerospace, Defense & Security at Frost & Sullivan.

"Some people say the F-35 is not worth the cost because less expensive legacy platforms can fill the fighter and strike role as well if they had the equivalent computer, sensor, and weapons upgrades," Curran told The National Interest.

"Others say only the F-35 has the combination of speed, maneuverability, stealth and flexibility to survive and win against today's fighter and air defense threats," Curran added.

Then there is the fact that the Joint Strike Fighter was also designed to take on numerous roles in combat. It is a single platform that can do what the A-10 Thunderbolt II, F-16 Fighting Falcon, F/A- 18 Super Hornet, and AV-8B Harrier are currently charged with, and likely do it better.

Many of those planes have also been in service for many years, and older aircraft are more expensive to maintain.

"Some say it is better to have a large number of adequate fighters than just a few exquisite fighters – the truth is probably in the middle," said Curran.

"That may be why the U.S. has F-22's, F-35's, and a large number of F-15's, F-16's, and F-18's in the inventory," Curran explained. "The U.S. has decided they can afford such a mix to accomplish a variety of missions outlined in different types of operational plans."

Another truth is that many countries cannot afford such diversity, so they opt instead for an "adequate" aircraft.

"However, as F-35 production ramps up, more countries are participating, for example Belgium just became the 13th country to participate," noted Curran.

Then there is the fact that this high tech aircraft could follow a trend that happens in consumer electronics – prices tend to go down as production ramps up. And the larger the number of aircraft produced the prices will likely drop further.

"Prices usually drop as production expands and the kinks are worked out of new airplanes," added Curran. "There will continue to be upgrades of all kinds for many years. It will be cheaper to buy a new fighter then spend a lot of money on maintenance, and upgrades to an older fleet."

Then there is the fact that Lockheed Martin is having components sourced from across the United States, so while the majority of the work related to the deal will be carried out in Fort Worth, Texas, no one location will benefit from this program and that could provide good jobs across almost every congressional district.

What matters, in the end, is whether it is a reliable aircraft.

"Experienced Air Force, Navy, and Marine pilots who have flown a variety of fighter/strike aircraft in combat including the F-35, say it is the best, the maintainers say the same, and combat readiness stats compared to the legacy fleet back it up," said Curran. "So, in my opinion, is yes, the F-35 is worth the cost."