$40 Trillion in Damage And Millions Dead: The Horror of a Second Korean War 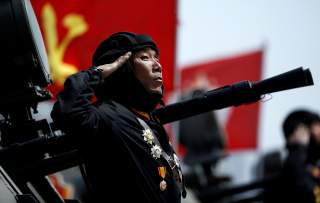 The summit between President Donald Trump and Supreme Leader Kim Jong-Un in June 2018 seemed to open hope for a general de-escalation of tensions on the Korean Peninsula. Eighteen months later, those hopes appear to have come to naught. While the direst predictions of analysts regarding North Korea’s Christmas “surprise” amounted to nothing, the relationship between Pyongyang and Washington remains as stressed as at any time since the beginning of the negotiations process.

When negotiations go bad, the attention of analysts immediately turns to the prospect of war. But with respect to war in Korea, analysts almost uniformly expect the consequences to be almost too horrific to be taken seriously as a realistic policy option.

The terminology we use for describing a conflict on the Korean Peninsula usually devolves into binaries of “nuclear” and “conventional,” but of course both sides have multiple escalatory options within those binaries. Obviously, estimates of the destructiveness of the conflict depend on the extent and speed of escalation. A conflict that begins with precision airstrikes to degrade North Korean military capabilities will incur less destruction than a conflict beginning with a DPRK surprise attack. Moreover, both sides will calculate their use of force based on short-term and long-term objectives, which necessarily evolve along with the conflict. Nevertheless, our estimates have to start somewhere.

In 2017, Franz Stefan-Gady conducted an extensive analysis of a conventional Korean War, including casualty estimates on either side. Stefan-Gady concluded that both the DPRK and the ROK would suffer military casualties in the hundreds of thousands and that the ROK would suffer similar or greater levels of civilian casualties, especially if North Korea turned its extensive artillery on the civilian areas of Seoul. Although any conflict would likely result in victory for the United States and the Republic of Korea, victory would come at the price of the devastation of the south.

Other estimates have produced compatible results.  A U.S. tabletop exercise in 2018 produced estimates of some 10,000 U.S. military casualties in the first few days of a conventional conflict on the peninsula. Casualties after that point would depend on the course of the war.  Another Pentagon study predicted a death rate for South Korean civilians of 20,000 per day of conflict, although much of this is front-loaded with the expected initial North Korean artillery barrage. More generally, Lawrence Freedman evaluated the literature on death tolls in the context of the Korean Peninsula, noting that even as U.S. (and more broadly Western) casualties have dropped in conflicts since World War II, civilian and hostile death tolls in war zones have remained exceedingly high. Given the location of the conflict, neither the U.S. nor the ROK could expect casualty totals to stay low.

Still, much depends on whether or not the combatants decide to go nuclear. An analysis by 38North in 2017 suggested that North Korean nuclear attacks on South Korea and Japan could result in 1.5 million deaths and in excess of five million casualties. In his book the 2020 Commission Report, Jeffrey Lewis estimated initial deaths in South Korea, Japan, and the United States at about 3 million, and follow on deaths from injuries, radiation, and infrastructure collapse at around 5 million.  Moreover, North Korea has extensive stocks of chemical weapons that might have limited utility against well-prepared South Korean and U.S. troops, but could dramatically increase civilian casualties.

Property damage in any scenario is virtually incalculable. South Korea is a high-income country, and any significant destruction would have a devastating economic impact. Estimates of the total property damage inflicted on Japan during the 2011 earthquake and tsunami range around $300 billion, and this would amount to a small fraction of the damage a war on the Korean Peninsula could inflict on South Korea, North Korea, and potentially Japan. Lewis estimated property damage at some $40 trillion, although this estimate included the nuclear destruction of Manhattan, Seoul, and Tokyo.  Even in a conventional conflict, nuclear installations in both North and South Korea would likely suffer heavy damage, causing lasting contamination across the region.

All of the discussion of different scenarios should not obscure the central fact of a second Korean War: it would be the most devasting event of the post-war period in terms of the human and financial cost. As Lawrence Freedman writes, “the safest assumption must be that in its scale and intensity a Second Korean War would be unlike anything experienced in recent decades, especially by Western countries.” No matter how poorly negotiations go, the United States should not seriously contemplate policies that exacerbate the risk of a second war in Korea.