40% of the U.S. Economy Wiped Out Thanks to Coronavirus: JP Morgan 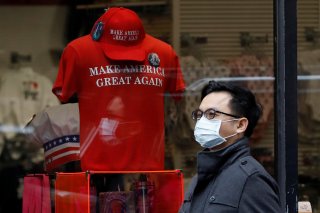 As the United States, with positive cases of coronavirus growing daily, careens into mid-April, it has become clear to all economic observers that the American economy has crashed into depression levels of unemployment and economic bankruptcy. Uncertainty remains whether the conditions that created the depression, mandatory closing of businesses due to the virus, will be alleviated in the summer—and the economy with it—or whether an inability to contain the disease will force Americans into unknown lengths of jobless crisis.

Multiple Wall Street firms have calculated a contraction in this financial quarter of 30%. Economists at JPMorgan, however, have an even more bleak prediction: a 40% contraction in the year’s second quarter. This is a sizable increase from their earlier prediction, made two weeks ago, that foresaw a 25% contraction.

“With these data in hand we think the April jobs report could indicate about 25 million jobs lost since the March survey week, and an unemployment rate around 20%,” they wrote, “Given the expected hit to hours worked this quarter we now look for -40.0% annualized real GDP growth in 2Q, down from -25.0% previously.”

The number of people applying for unemployment benefits continues to spike, with over six million added to the dole in the past week. That brings the current total to 16.8 million Americans.

JPMorgan’s longtime CEO Jamie Dimon, who has administered the bank since 2004, says he expects the country to enter a “bad recession.” But unlike in the 2008 recession, when JPMorgan required a multi-billion-dollar bailout by the federal government, this time Dimon said he hopes his bank acts as a “port in the storm.”

Despite Dimon’s premonitions about the length of the crisis, JPMorgan economists continue to see a recovery in the second half of the year, grounded on the optimistic assumption that social distancing measures will be lifted by June. Once people are free to return to work—what’s left of it—they expect an immediate, third-quarter rebound of 23%, with a further increase of 13% in the fourth quarter. This tails off again, however, after the start of the new year, where they once again see a 10% decline, possibly linked to the virus returning in the winter.

These projections are constantly shifting, as most economists are unsure how to calculate the effects of a viral pandemic into their models. And with unemployment and contraction rates unprecedently high, no one is quite sure how low rock bottom may be.

“Over the last few weeks forecasters have been operating in a fog. Economic models that have been trained on post-war data face obvious limitations. In their place we have reverted to different ways to address the outlook,” they wrote.

In their own calculations, JPMorgan economists considered the impact on the demand curve, and how it was affected by consumer spending cuts deemed necessary during the quarantine measures. They also took into account any shocks to the supply side, such as an increase in stay-at-home ordering and the productivity of labor in a home environment.

“The long-run destruction of the level of output is difficult to quantify, but likely quite large,” they warned.