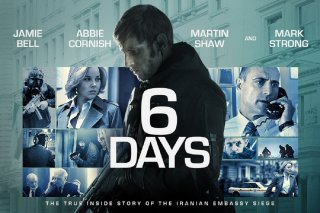 Today even medium-sized police forces have special units that can deal in hostage rescue operations, but 40 years ago this was anything but the norm. It all changed on April 30, 1980, when the Iranian Embassy on Prince's Gate in London was stormed by six terrorists who demanded autonomy for a region in southern Iran called Arabistan.

Five days into the siege, four hostages had been released but 22 remained. A number of scenarios were considered to rescue the hostages, and finally, Operation Nimrod was given the green light. A team of masked, black-clad soldiers of the Special Air Service sprung into action; set off explosives, burst through windows, and shot dead the hostage-holding terrorists.

While numerous movies have dramatized such hostage rescue missions as high energy moments – notably so in the 1982 film The Final Option (known as Who Dares Wins, the motto of the SAS, in the UK) – in reality it was far less action-packed. It was actually a tense, even intense moment, and was one that lasted for days, not hours. Unlike in the movies the SAS, which had been in position for four days, carefully planned and rehearsed their hostage-release tactics at a full-size mock-up of the embassy that had been built at their temporary base in Regent's Park Barracks.

What the British government didn't want to be a repeat of past hostage rescue failures such as the bungled attempt at the 1972 Munich Olympic games to free seven Israeli athletes taken by Palestinian terrorists, or the U.S. Delta Force's Operation Eagle Claw to rescue the U.S. Embassy staff taken hostage in Tehran during the 1979 Iranian Revolution.

The SAS wasn't just up to the task; it was practically created for such an event.

The Special Air Service was formed as 62 Commando in July 1941 to undertake small-scale raids on German lines in the North African desert during World War II. The unit was disbanded when the war ended but was re-established in 1947 as part of the Territorial Army (TA) becoming the 21st Battalion, Special Air Service Regiment (Artists Rifles) – essentially continuing the tradition of a volunteer rifle unit that was made of British artists including painters, sculptors, and actors. This evolved in the 22nd SAS Regiment and was the only time a regular army unit evolved out of a TA unit.

The SAS was deployed during the Malayan Emergency, the Dhofar Rebellion in Oman, the Indonesian Confrontation, and the Aden Emergency. During the Troubles in North Ireland, the SAS carried out surveillance operations and ambushes against IRA terrorists.

But its moment in the spotlight came on May 5, 1980, when the orders, "Go!, Go!, Go!" were issued. After six days the Iranian terrorists reached a breaking point and killed one of the hostages. Despite warnings that other hostages would be killed if any attack was made against the embassy, the order was given.

The SAS unit was divided into two teams: the 18 men of Red Team worked their way down from the fourth, third and second floors; while the 10 men in Blue Team worked their way up from the basement. All the men were outfitted in black Royal Tank Regiment overalls with black respirators that covered their faces. Each carried a German-made Heckler & Koch MP5 submachine gun, chosen over the British-made Sterling L2A3, because the MP5 fired from a close-bolt, which made them more accurate – essential for hostage rescue situations.

The need for a large number of SAS soldiers – to take out just six terrorists – was due to the size of the embassy and the fact that the hostages were spread out.

It began at 7:23pm, and due to the media had set up outside, it was essentially broadcast live. The rescue was over in just 11 minutes, five terrorists were killed and one was captured and arrested. Two hostages were wounded during the assault along with one member of the SAS team.

In part, because the raid was broadcast live at a peak time on a bank holiday Monday evening, the SAS was truly in the spotlight. It was a defining moment in British history and brought the unit into the public eye after it had enjoyed its previous obscurity.

Thousands of British soldiers applied to join the Regiment.

A 2017 film, 6 Days, offered a dramatized version of the events. While Robin Horsfall, who had been a member of the SAS team, was critical of some of the characterizations – perhaps it was best summed up by the Guardian newspaper, which called the film dull apart from the sequences involving the SAS.

Any good and successful hostage rescue is likely best when it is a dull affair.