5 Crazy Weapons That Are Banned From Going to War 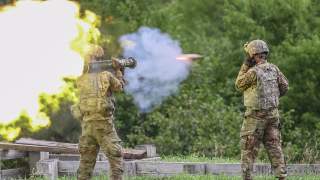 Long gone are the days when war was governed by an “anything goes” system. As weaponry has become more advanced, so have the rules of warfare. Practices that involve excessive torture of the enemy are not only frowned upon, but have also been made illegal on the international stage.

Now, weaponry is governed by the Geneva Convention, which has outlawed scores of weapons because they cause unnecessary suffering. But here are five that surprised us.

Though these sound pretty medieval, spike pits were in use as late as the Vietnam War. However, Protocol II of the 1979 Convention on Certain Conventional Weapons finally banned their use altogether. During World War II, the Japanese were known to coat bamboo spikes with animal feces so that even if the spikes didn’t kill you, an infection certainly would.

Though flamethrowers aren’t entirely banned, you can’t use them to fry your enemies, according to Protocol III of the Convention on Certain Conventional Weapons. This clause prohibits the use of incendiary weapons on people. You can, however, use them to clear foliage.

Militaries are no longer allowed to set up land mines that can’t be detected by x-ray. Under Protocol I of the Convention on Certain Conventional Weapons, there is a requirement that all weapons must use metallic fragments that can be seen via x-ray. In addition, mines placed outside of fenced and cordoned areas are required to use self-destruct mechanisms set to go off after a certain period of time. There is also an ongoing campaign to ban the use of land mines internationally through the Ottawa Treaty; however, it has not yet passed. China, Russia, and the United States have yet to sign it.

During the 1898 Hague Convention, it was decided that militaries would no longer be able to drop bombs from balloons; however, the practice survived well into World War II. One family in Oregon — including a pregnant woman and her five children — was killed by one of these balloons while picnicking. They are the only people to be killed in the contiguous United States during World War II. The weapon itself is mostly useless as there isn’t enough impact to set the bombs off as they drift from balloons.

You might not think of pepper spray as a weapon for warfare. But because of the Hague Convention’s ruling on aerosol chemical weapons that disrupt breathing, you can’t bring your pocket mace to the battlefield … not that you should. It’s not exactly an effective weapon, but more like an unpleasant deterrent.