5 French Super Etendard Fighter-Bombers Are on the Move 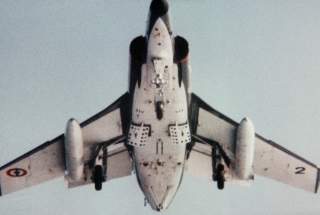 Five ex-French navy Super Etendard fighters have arrived at the port of Bahia Blanca in Argentina. The subsonic fighter-bombers eventually will equip the Argentine navy and, by the end of 2019, could be the most sophisticated warplanes in the Argentine military.

Buenos Aires’ acquisition of the old French jets represents a minor turn-around in the fortunes of a military that long has struggled to keep planes in the air.

The $13-million Super Etendard purchase hasn’t been without its own complications, Scramble on May 12, 2019 reported. “All five were scheduled to be offloaded on May 9, 2019, but this turned out to be impossible due to a strike in the harbor at the multipurpose dock of the company Patagonia Norte, in Ingeniero White.”

“It is expected that the aircraft will be unwrapped this weekend,” Scramble added. “They will be presented in an official ceremony on May 13, 2019. The Argentine minister of defense as well as senior leaders of the Argentine navy will attend the ceremony.”

The Super Etendards originally entered service with the French navy in the late 1970s or early 1980s. The French in the 1990s upgraded the carrier-capable jets to the Super Etendard Modernize standard before retiring them in 2016.

The navy’s efforts to rebuild its fighter fleet come amid a wider struggle on the part of the Argentine defense ministry to maintain viable air components. British forces in 1982 shot down around a third of Argentina’s 400 warplanes, but in subsequent decades funding woes and mismanagement exacted an even greater toll.

By late 2015 Buenos Aires could muster fewer than 250 warplanes including a few Vietnam War-vintage, subsonic A-4s and equally aged, but supersonic, French-made Mirages. Even the planes that could fly lacked modern systems.

In the context of the Argentine military’s long unilateral disarmament, acquiring five old Super Etendards is a big deal. At least they can fly and fight.