5 Reasons No Military Wants to Go to War Against America 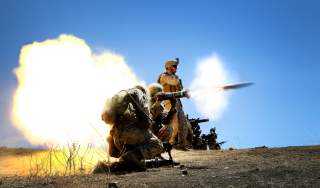 The author is the former defense editor for the National Interest.