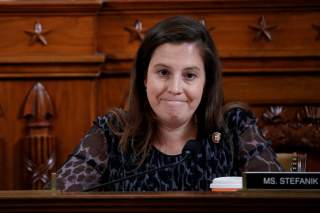 Few would have predicted that one of President Donald Trump’s strongest defenders in the House impeachment hearings would be a Republican congresswoman who on occasion has been critical of him.

Rep. Elise Stefanik, R-N.Y., has attracted public attention for her spirited defense of the president and her status as the only GOP woman on the House Intelligence Committee.

Those attributes came to the fore during the impeachment inquiry as Stefanik asked questions of Marie Yovanovich, a former ambassador to Ukraine. Skirting procedural rules, the committee’s ranking member, Rep. Devin Nunes, R-Calif., tried to yield a portion of his time for asking questions to Stefanik.

When the committee’s chairman, Rep. Adam Schiff, D-Calif.,  repeatedly interrupted Stefanik and cut her off, Trump’s defenders could claim that sexist Democrats in the hearing had silenced a woman and prevented Republicans from asking questions.

Here are five things to know about Stefanik:

1. When elected to Congress, she was the youngest woman ever to win.

In a landslide victory over Democratic candidate Aaron Woolf in 2014, Stefanik became, at age 30, the youngest woman ever elected to Congress, as well as the first Republican candidate to win her district in 21 years. She won 53 percent of the vote to 32.5 percent for Woolf and 10.6 percent for a Green Party candidate. (Another New Yorker, Democratic Rep. Alexandria Ocasio-Cortez, in November 2018 broke Stefanik’s record when she was elected at age 29.)

In her 2014 campaign, Stefanik worked hard to win the trust and confidence of voters, driving more than 100,000 miles through upstate New York’s 21st Congressional District. The district covers 12 counties, stretching north to the Canadian border and east to the border with Vermont.

She said that voters told her she was too young to run for office, but she won the election despite their doubts.

Even then, her troubles weren’t over. Stefanik was so much younger than the average member of Congress that the Capitol Police initially stopped her when she tried to enter the building. They didn’t believe she was a member of Congress.

2. She has voted against Trump and conservatives in the past.

Now 35 and in her third term, Stefanik has not shied away from asking questions that helped Trump in the impeachment hearings, but she also voted against one of his most important legislative priorities.

She was one of only 12 House Republicans to vote against the president’s Tax Cuts and Jobs Act. Four of the others who voted against it also were from New York. The measure became law without their support.

According to Albany, New York’s Times Union newspaper, Stefanik voted against the act because limitations on a federal tax deduction for high state and local taxes meant 13% of New Yorkers would face a tax hike.

She also was one of just eight Republicans who voted in May in favor of the Equality Act, which would extend Civil Rights Act protections on the basis of sexual orientation and gender identity. The Equality Act’s provisions would harm women by dismantling sex-specific sports and locker rooms, among other negative effects, according to The Heritage Foundation. It passed the Democrat-controlled House, but is unlikely to get a vote in the Republican-controlled Senate.

According to The Hill, Stefanik supports the act because it ensures protections in “employment, housing, credit access, education, public spaces and services, federally funded programs and jury service” for gays and transgender individuals.

Stefanik’s parents own and operate Premium Plywood Products in Guilderland Center, New York. After working on Mitt Romney’s 2012 Republican presidential campaign, she worked for her parents’ business in sales and marketing.

In 2014, she pivoted from plywood to politics in her campaign for Congress.

4. A graduate of Harvard, she wrote op-eds for The Harvard Crimson.

At Harvard, Stefanik gained valuable political experience, serving as vice president of Harvard’s Institute of Politics before graduating with a degree in government.

While at Harvard, Stefanik wrote eight articles for The Harvard Crimson, the college’s famed newspaper. By senior year, she was in charge of editing the editorial pieces. Her editorial topics ranged from criticizing leftists for disrupting a panel discussion on careers in counterterrorism to commenting on love’s “capriciousness and involuntary nature.”

Stefanik’s understanding of love seems to have served her well. She married her husband, Matthew Manda, in August 2017 in Saratoga, New York. With appropriate capriciousness, he proposed to her using a ring secured in its box with dental floss, Stefanik told the Glens Falls Chronicle. Manda’s father is a dentist.

Not cowed by New York Mayor Bill de Blasio’s proposed ban on flavored milk in the city’s public schools, she signed an open letter saying she “strongly opposed” it.

She attacked the proposed ban on chocolate milk as “a serious disservice to North Country dairy farmers” that was “reckless and irresponsible.”

Jackson Elliott is a member of the Young Leaders Program at The Heritage Foundation. This article first appeared in the Daily Signal in 2019.