5 Things You Might Not Know About Russia's Killer Tanks 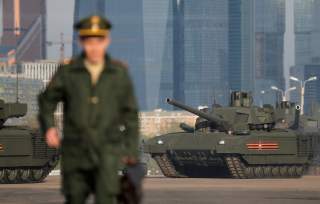 Russia’s T-72s, T-80s and T-90s may appear very similar. They all have three man crews, autoloaders, a smoothbore 125mm gun and relatively low weight and profiles relative to Western tanks. But the designs of these tanks go a lot further than the simple appearance. A lot of small features contribute to the survivability and lethality of these fighting machines. Here are five features of Russian tanks you may not have known about.

Making a high explosive shell explode in midair (airburst) is one of the most consistent ways to increase its effect against infantry. Ainet brings this functionality to the already impressive high explosive shell that the 125mm smoothbore cannon of the T-90A, T-80UK and T-80UE-1. Ainet can even be used against helicopters due to the heavy weight of the 125mm HE Frag shell, provided the gunner can track them.

Ainet works by integrating with the tank’s laser rangefinder. The gunner selects a target and lases it, determining the distance to the target. Then, an electronic circuit sets the fuse to detonate at that distance or slightly past it on the HE Frag shell as it is being loaded into the gun by the autoloader. A special electronic fuse is required to be added to an HE Frag shell to make it compatible with Ainet, but no other changes are required. Then the round is fired, and the electronic fuse detonates at the correct distance to achieve the airburst effect.

Gunner’s sights in modern tanks have advanced by leaps and bounds within the last two decades. The advent of digital technology in sights has allowed for many more features to be built into sights that were not possible with earlier mechanical or electromechanical designs. Increased zoom levels are one benefit, but one that takes a little of the human skill out of gunnery is automatic target tracking.

Automatic target tracking uses logic and optical recognition circuits, coupled with digital turret controls to automatically track targets. Targets must still be initially “designated” and locked onto by the gunner, but this makes shooting moving targets far more accurate, as it eliminates the human error factor present. This feature is present on all Russian tanks that feature the digital Sosna-U sight, including the T-72B3, T-80BVM and T-90M.

Incendiary substances such as gasoline or napalm have always been hazardous to tanks. The Soviets anticipated the use of such substances in the event of a Cold War gone hot as the United States made extensive use of napalm in Vietnam. Napalm could choke out the engines of tanks and melt through sensitive control wires, potentially rendering components such as external lights and smoke grenade launchers useless.

To counter this, the Soviets designed a special system called “Soda.” Despite the fancy name, the system was fairly simple. To harden the wires on the tanks, they were placed in metal pipes. A fine meshed grid was placed on the roof of the transmission to help drainage. Protective metal frames with asbestos cloth were placed on the fuel lines from external fuel tanks. “Soda” in various forms have been fitted to every Soviet and Russian tank since the T-62M.

The T-80’s design was designed with tactical mobility in mind. Not only did the turbine engine result in impressive ability to jump and maneuver off-road, but it also gave it fast on-road speeds for a tank. This was important when it was designed, as it could react quickly to changing battlefield situations and advance quickly off a transporter. To enhance this feature, the T-80U was built with a special air scoop on the rear of the turret. These scoops are present on most T-80Us and the T-80BVM.

The air scoop provided a channel for air to move from the top of the turret into the turbine intake. It can be seen in the raised position in this photo. The function is to improve the quality and speed of the air moving into the turbine, to allow the turbine to run more efficiently. However, it’s only effective when the tank’s turret is pointed within 30 degrees of straight forwards, limiting its use to speeding up the tank during road marches. The scoop was usually raised when the tank was in combat.

While a “secondary” weapons system, the tank commander’s machine gun can prove a vital weapon in defending the tank in an urban environment against infantry and light vehicles. The Abrams only received a stabilized commander machine gun in the M1A2 TUSK which started to be fielded in the 2000s, when the CROWS remote weapons station was mounted on the turret.

Conversely, the T-90’s commander machine gun features a vertical stabilization system from the outset. While it’s not horizontally stabilized, the regular stabilization mechanisms of the turret provide a stable shooting platform, provided the turret is not attempting to track another target independent of the commander. The mechanism is rather compact, so it only works within -3 to +30 degrees of the machine gun’s -5 to +70 degree range, but it’s a neat feature nonetheless. The new T-90M features a fully stabilized commander machine gun.