5 Weapons Trump Could Strike Iran With 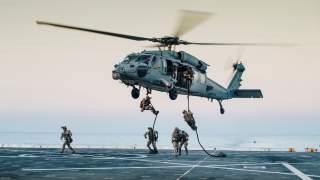 Key point: If Donald Trump commits to war, he has several options.