50% Economic Decline: That's How Bad a Coronavirus Depression Could Be 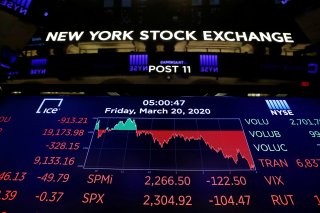 The reality of the economic calamity is beginning to hit home for economists, investors, and public officials. The shutdown of the United States economy, still the largest in the world, in response to the coronavirus pandemic has set the country up for its worst economic measurements since the 1930s.

Forecasters believe that economic activity could decline by as much as 50% in the second quarter of the year. Even on the sunnier end of predictions, investment firm Morgan Stanley has expected a 30% decline this quarter. That would be the worst performance since 1946.

“I think some of you don’t appreciate just how poor we’re all about to be,” commented Helen Andrews, former managing editor of the Washington Examiner.

The Federal Reserve has committed itself to do whatever is necessary “to support smooth market functioning.” In practice, this will involve the purchasing of government bonds and mortgage-backed securities without limit. This could result in an experiment of Modern Monetary Theory (MMT), the heterodox economic view that believes through the state’s monopoly on money creation the government can fund all desired spending programs. Advocates of MMT include New York Congresswoman Alexandria Ocasio-Cortez.

Meanwhile, a multi-trillion-dollar bill, intended to act as both relief and stimulus, has stalled in Congress. The proposal had been crafted predominantly by senate Republicans with the full knowledge and involvement of Democratic leadership, but on Sunday Democrats came out against the legislation unless the final bill included numerous amendments and additions that represented longtime desired Democratic goals. These included worker’s protections, energy subsidies, and environmental regulations. The bill is still in negotiation.

“This is not about the ridiculous Green New Deal. It is about putting our great workers and companies BACK TO WORK!” tweeted President Donald Trump this morning about the Democrat’s poison pill amendments. “Congress must approve the deal, without all of the nonsense, today. The longer it takes, the harder it will be to start up our economy. Our workers will be hurt!”

With businesses around the country shut down, and their workers sent home, unemployment in April is expected to set a record high. The numbers will range into the millions. If Morgan Stanley’s prediction of a 30% retraction is correct, that would equal a 13% unemployment rate. If the decline is 50%,

This has led an increasing number of spectators and officials, including the president, to consider lifting the quarantines despite the disease in an attempt to save the economy. “Our people want to return to work. They will practice Social Distancing and all else, and Seniors will be watched over protectively & lovingly. We can do two things together,” Trump tweeted. “THE CURE CANNOT BE WORSE (by far) THAN THE PROBLEM! Congress MUST ACT NOW. We will come back strong!”