50-Kilowatt Air Defense Lasers Are Headed to the Army 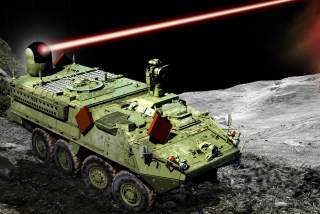 Key point: The Pentagon is eager to adopt the latest anti-air lasers into the Army’s vehicles.

21 Oct. 2019 -- At the annual Association of the U.S. Army meeting in Washington, D.C. last week, a Northrop Grumman official confirmed that the company has been contracted to deliver the first 50-kilowatt laser weapons to the U.S. Army.

Northrop Grumman and Raytheon both have been contracted to develop competing prototype lasers to be integrated into General Dynamics Stryker armored combat vehicles for short-range air defense.

The laser will be mounted on a platoon of four Stryker vehicles in 2022, to protect maneuvering brigade combat teams from unmanned aerial vehicles (UAVs), helicopters, rockets, artillery, and mortars.