50 Years Ago, a Single Submarine Changed the Course of the 1971 Indo-Pakistan War 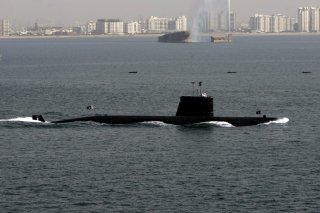 During World War II, submarines were widely used and caused devastating damage among the belligerents. However, it would take twenty-six years after World War II ended before another submarine made a kill (and since then only two boats had sunk enemy ships; the other being nuclear-powered HMS Conqueror which sank ARA General Belgrano during the 1982 Falklands War). This December 9 marks the fiftieth anniversary of this submarine kill in a lesser-known war, the 1971 Indo-Pakistan War, which had started against the backdrop of the Bangladesh Liberation War. On December 3, 1971, Pakistan launched surprise air strikes on India, leading to another war breaking out between the two South Asian powers.

The geographic location of Western and Eastern Pakistan necessitated the control of maritime sea-lanes of communication by Pakistan, as East and West Pakistan is separated by 1,000 miles of Indian territory. Any supply and transport of troops to East Pakistan from West Pakistan had to be conducted by maritime means. India knew this and sought to deny Pakistan maritime passage by conducting a surprise attack, Operation Trident, on Karachi naval base on the night of December 4. The Indian Navy’s missile boat succeeded in destroying a Pakistani destroyer and damaged a few other ships. Following this, the Indian Navy launched a second attack at Karachi on the night of December 8, Operation Phyton, which destroyed the main Pakistani Navy fuel dump and sank three merchant ships.

Meanwhile, in the Western Pakistan theatre, PNS Hangor, which was already at sea when the 1971 Indo-Pakistan War broke out on December 3, was redeployed to search and destroy as well as disrupt the Indian Navy’s operations in the Arabian Sea. PNS Hangor was a French-built Daphné-class diesel-electric submarine. With its surface naval fleet almost destroyed or disabled by the attacks by India on the nights of December 4 and 8, the Pakistani Navy had to rely on its sole submarine operating in the Arabian Sea to disrupt Indian operations.

PNS Hangor surveyed the coasts of Bombay and made contact with an Indian naval flotilla but was unable to position itself for a viable attack. Nonetheless, the Indian flotilla had detected the presence of a submarine and took evasive actions as well as anti-submarine action. This Indian flotilla was actually heading for another sneak attack at Karachi on the night of December 5. The presence of PNS Hangor had disrupted the operation and dispersed the Indian Navy ships, ultimately cancelling their attack at Karachi. Despite rigorous anti-submarine actions undertaken by the Indian ships, PNS Hangor managed to slip away and continued her combat patrol.

PNS Hangor subsequently made another contact with two Indian Navy ships on the morning of December 9 off the Kathiawar coast. She detected the ships with her sonar and realized that they were two frigates conducting anti-submarine maneuvers, most likely looking for her. PNS Hangor tracked the Indian navy frigates while taking evasive actions. By the evening of December 9, PNS Hangor managed to position herself on the path of the frigates undetected and launched a torpedo attack. At three minutes before 8 p.m., PNS Hangor fired a homing torpedo but missed. A second torpedo was fired, and this time, it found its mark hitting the Indian frigate INS Khurkri. The second frigate, INS Kirkan closed in on PNS Hangor’s position resulting in PNS Hangor hurrying out of the area but not before unleashing a Parthian shot, firing a third torpedo at INS Kirkan, which managed to evade the torpedo. INS Kirkan then called off her hunt for the submarine and instead turned back to rescue INS Khukri’s crew but could only rescue just a few. The INS Khukri, its magazines hit, sank within two minutes and almost its entire complement of eighteen officer officers and 176 men, including the captain, sank with it. This was the single largest loss of Indian military personnel during the 1971 Indo-Pakistan War.

Following PNS Hangor’s attack, a massive submarine hunt was conducted by the Indian Navy involving surface ships, aircraft, and helicopters. The sub-hunt managed to disperse and divert the Indian Navy ships. A third attack on Karachi port, code-named Operation Triumph, which was planned for the night of December 10, had to be cancelled due to the sub-hunt as well as the risk posed by the lurking submarine. There would be no more naval attacks on Karachi from that night on. The Indian Navy called off its sub-hunt on December 13. PNS Hangor managed to evade the sub-hunters and successfully returned to Karachi on December 18, two days after the end of the 1971 Indo-Pakistan War.

The strategic effect of the PNS Hangor’s actions, although not spectacular in terms of number or tonnage of ships sunk, yielded immense psychological fear and created consequences far above the weight of its torpedoes. The sinking of INS Khukri in the 1971 Indo-Pakistan War had forced the Indian Navy to cancel a crucial attack on Karachi port as well as to divert and scatter valuable naval assets to search and sink the PNS Hangor. The fact that an enemy submarine just successfully sank a frigate and lurked in the Arabian Sea was more than enough to fuel the fear of further submarine attacks, which led to an intense anti-submarine operation.

As numerous countries are seeking to build a small submarine force today, this lone submarine action fifty years ago bears testimony that even a single submarine, if used shrewdly, may still be able to produce significant strategic effects well above its tonnage.

Dr. Adam Leong Kok Wey is professor of strategic studies, and the Deputy Director of Research in the Centre for Defence and International Security Studies (CDISS) at the National Defence University of Malaysia. His latest book is  Strategy and Special Operations: Eastern and Western Perspectives published by NDUM Press (2021).