5G Is Old News: China Wants 6G For Its Military 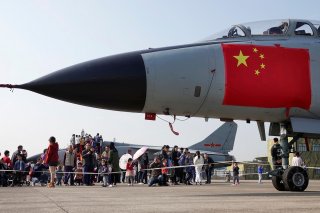 While most consumers still have yet to upgrade to 5G wireless service around the world, and its deployment is still only in the "rolling out" stages, in Beijing plans could be underway to develop 6G wireless technology. This wouldn't be for faster streaming for consumers in China, or even as a way to better track its populace – as has been done increasingly since the outbreak of the coronavirus that first emerged in the city of Wuhan.

Rather, the Chinese are developing 6G for use by its military.

The Express newspaper in the UK reported that the Chinese Ministry of Science and Technology are working on a close to zero latency 6G Internet network, which would be rolled out for the military before eventually benefiting consumers in China. Earlier this month the People's Liberation Army's (PLA's) National Defence News published an article, "If 6G Were to be Used in the Future Battlefield," and this piece noted the distinct technological edge and rich potential for military applications compared to 5G.

The article stated: “If 6G technology is introduced into the military, it will surely have a major impact on military practices, such as war formation, equipment development, and battlefield communications. Promoting the gradual application of 6G in the military might be one of the major focuses for the Chinese armed forces to adapt to the new military changes in the future."

Analysts in the United States agree that 6G could provide Beijing a way to leapfrog American technology.

"The 6G news out of China is intriguing, particularly its focus on military applications," said technology industry analyst Charles King of Pund-IT.

Not so fast, 6G is barely planned at this point. "6G is undefined right now," explained Steve Blum, founder of consulting firm Tellus Venture Associates. "There's an assumption that it will be developed over the next 10 years, and that it will be something like total immersion in a sea of data. FCC commissioner Jessica Rosenworcel talked about it at the Mobile World Congress show in Los Angeles a couple of years ago and described it as continual network densification. 5G technology is all about network densification, but at the city block and factory floor level. 6G would be about densifying networks at a personal level. But 5G's potential has barely been tapped and there's a lot of work that has to be done before it runs out of steam."

The question is how soon such technology could actually be deployed for military applications.

"I'm sure the Chinese are working on next generation wireless technology, and want to use it to gain both economic and military advantages," Blum told the National Interest. "That's been a safe assumption for decades. So if (China) can develop technology that allows troops, equipment and weapons to be continually and comprehensively linked to AI-class analysis, command and control; and the U.S. doesn't, they'll have a powerful advantage."

This could provide that ability for Beijing to leapfrog American efforts.

"Were China's R&D efforts to succeed, the military would have access to zero latency networks that deliver massive volumes of data in essentially real time," added Pund-IT's King. "n combination with advanced AI functions, 6G could be a game-changer for military processes ranging from logistics and planning to weapons placement, targeting and guidance. That, in turn, could provide massive advantages on and off the battlefield."

China's take on a military-first approach is also telling, said King. "It should be noted that 6G would also benefit numerous business processes and scenarios but China's focus on military applications offers some insights into its leadership's long term plans and ambitions. China has been far more aggressive and successful at deploying 5G networks than most other countries. Unless the U.S. and others get off the dime, they could be playing catch-up for years or even decades."

However, as with any major technological advancement it requires that everything work perfectly and that there are no setbacks. Also, catching up can be far easier than starting from scratch.

"The U.S. can match and surpass Chinese tech R&D capabilities and doesn't have to fall behind," explained Blum. "The U.S. military has been gradually losing the total and overwhelming superiority it achieved in the 1990s, but that was a historical fluke. Going forward, the U.S. can still maintain technological superiority, but the margins will be thinner and it can't take it for granted."

Then there is the fact that 6G development is likely to take the diverse development path that 4G took, rather than the internationally coordinated standards-setting process that led to 5G.

"It'll be developed by bits and pieces over the next ten years, and then eventually bundled into a package with a 6G label on it," added Blum. "As with other technologies, the first bits and pieces will likely be developed for military applications. But it's not 6G connectivity that'll make the difference. Superiority will be gained or lost on the basis of the applications, data and devices that use it."