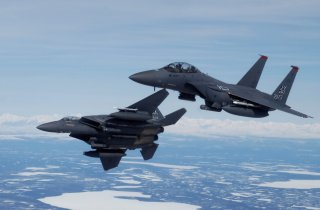 The U.S. Air Force announced on Tuesday that it completed tests on its new “Bunker Buster” weapon, which is officially called the GBU-72 Advanced 5K Penetrator.

The bomb was released by a 96th Test Wing F-15E Strike Eagle at 35,000 feet, over Eglin Air Force Base in Florida.

The testing took place on October 7.

“The 5,000-pound bomb’s release marked the end of a test series planned by the 780th Test Squadron and performed by the 40th Flight Test Squadron. That series included the first-ever weapons load, flight and release of the weapon July 23,” the Air Force’s press release said. "The squadron’s test goals were to show the weapon could safely release from the aircraft and validate a modified 2,000-pound joint-direct-attack-munition tail kit’s ability to control and navigate a 5,000-pound weapon.”

The Air Force also described the tests as the base’s “largest-ever arena test,” and was more than double the size of the previously largest test.

“Test series of this magnitude are never successful, overall, because of just a single person or organization,” Ronald Forch, 780th TS Programming Engineer over the GBU-72 flight and ground test efforts, said in the Air Force announcement. “They are ultimately successful because the test engineer is able to perform a role very similar to that of a symphony conductor guiding the performance of a series of consecutive miracles – none any more important than the other.”

The GBU-72 is expected to be substantially more lethal than predecessor weapons like the GBU-28.

“An advantage to the modeling and simulation to design approach used is early prototypes are production representative,” James Culliton, the GBU-72 Program Manager, said in the release.  “This helps us bring our operational test partners in sooner with eyes on, hands-on participation, validating our design and procedures sooner while including input that improves the weapon.  The collaboration we’ve enjoyed with the 780th TS and 40th FLTS to this end has been the best I’ve experienced in acquisitions.”

“Outwardly, the GBU-72/B itself looks essentially like an enlarged 2,000-pound class GBU-31/B Joint Direct Attack Munition (JDAM) precision-guided bomb configured with a bunker-buster warhead, such as the BLU-109/B or the improved BLU-137/B,” The War Zone said of the test. “The latter of these was originally known as the Advanced 2000 Pound Warhead or A2K, and you can read more about that bomb here. This 5,000-pound-class weapon uses a modified version of the GBU-31/B's tail kit, which contains a GPS-assisted Inertial Navigation System (INS) guidance package.”

The next step in the testing is the additional JDAM integration test flights, with “ developmental and operational testing” set for 2022, the Air Force said.