6 Worst Movies About Taking Over the World 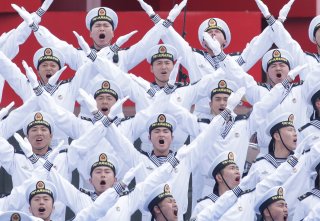 Coronavirus has consequences. Washington and Beijing are headed for a great divorce, and Beijing is getting pretty cranky. That’s often the case when your circle of friends start siding more with your soon-to-be-ex. And right now, China’s getting some pretty harsh blowback about its deplorable behavior that triggered a global pandemic.

Beijing’s plans for global domination have definitely hit a speed bump. There will be pushback from the United States and its friends and allies. But, if you’re a wheel in the Chinese Communist Party and need some cheering up, know that others have done far worse—at least in the movies.

Here are the six worst movie plots for conquering the world.

#6. Kiss the Girls and Make Them Die (1966). Back in the day, James Bond was all the rage. And with each successive Bond movie, the super Secret Service agent was responsible for saving more and more of the world. By the fourth film, 1965’s Thunderball, he was delivering us from global nuclear blackmail. With Bond a proven winner at the box office, spoof spy flicks abounded. One of the worst featured future TV detective Mike Connors, who also had a small part in one of the Bond films as 007’s CIA sidekick. Mike should have stuck to television. In this awful film, an American spy stumbles on a plot by a Brazilian industrialist to sterilize the world with radiation from his personal satellite and repopulate the earth by himself and a stash of beautiful women he keeps in suspended animation. Guess who he wants to fund his scheme? Yeah, it’s Communist China. Even back then you couldn’t trust Beijing.

#5. Battle Beneath the Earth (1967). Those sneaky Chinese communists. In this British Bond rip-off, a rogue faction of the Red Army builds a fantastic borrowing machine that tunnels under U.S. cities. The plan is to use them to smuggle in nuclear weapons, blow up America and take over the world. Someone should have blown up the studio, cast and crew. What a stinker. The film did feature actor Ed Bishop who was later featured a cult-classic TV show (UFO).

#4. Master of the World (1961). A mysterious character named Robur and his equally mysterious crew build a lighter-than-airship, flying around the world attacking anyone who makes war. Other than coming up with a weird way to enforce global peace, everything else in this movie is pretty forgettable. Charles Bronson, who had a supporting role in the film, went on to fame and fortune in movies like Death Wish (1974). A far better fate than the one dealt Robur and his crew.

#3. The Conqueror (1956). You can almost hear the studio suit blue-skying this one: “Genghis Khan tried to take over the world. Let’s make a movie about him—and let’s get John Wayne for the lead. Yeah, Wayne. That’s the ticket!” Believe it or not, the Duke really wanted the part. At the time, he was one of the biggest box office stars in the world, thanks to such memorable films as The Quiet Man (1952). What he wasn’t was an actor of much range. This role was way off the reservation for him, and it shows. Critics loathed the film, rating it one of the 50 worst movies of all times. The movie may also have helped kill Wayne, for real. It was filmed on an old atomic bomb test site. Scores of the cast and crew members died from cancer, including Wayne and his co-star, Susan Hayward.

#2. They Saved Hitler's Brain (1968) Really? Why? Mad Nazi scientist spirits Hitler’s brain to a remote island where they plan to revive him and the Third Reich and finally conquer to world. Considering how Hitler’s first run at global domination turned out, you have to wonder what they were thinking. This would be like asking to be Mickey Rooney’s ninth wife and thinking: “What could go wrong?” The actor Bill Freed played Hitler. His other “memorable” performance was in The Madmen of Mandoras (1963), a shorter version of the same stupid idea.

#1. Moonraker (1979). By 1970s, the James Bond franchise had run out serious actors to play the super spy. Enter Roger Moore, who played the spy for laughs. And why not? After all, the plot in this one is absolutely laughable: a deranged billionaire decides to kill everyone from space and then repopulate the world with the help of the cadre of beautiful people he’s stowed safely on space shuttles. This may be the worst Bond film ever made—and that’s saying a lot, if you ever saw Roger Lazenby. It certainly stinks as a plot to take over the world. The only thing missing is the Chinese.