6G Wireless Internet Is Already Here—If You're in the Army 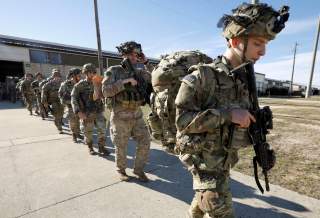 (Washington, D.C.) A dismounted soldier taking enemy fire in a high-intensity combat engagement comes across a vital enemy location, snaps a quick photo of the area with a handheld device and then transmits the time-sensitive intelligence information to other soldiers and ground commanders. Images are then sent to air and ground units in position to attack, and the enemy asset is destroyed in an instant, long before it has an opportunity to strike U.S. forces.

This kind of scenario represents the type of warfare scenario increasingly receiving attention from Army technology and weapons developers, as success or failure - even life or death - can hang in the balance of networking speed to include computer processing, radio transmissions or other kinds of electricity-reliant communications systems. In short, strong, fast, wide-ranging networking can determine victory in war.

It is with these specific modern combat dynamics in mind that the Army Research Office is funding a government, industry and academic team of researchers now on the cutting edge of establishing a new, high-frequency, highly-promising semiconducting transistor technology.

The transistor technology involves the use of carbon nanotubes, described in an essay from “Science Daily,” as materials which “take the form of cylindrical carbon molecules.”

Aligned carbon nanotubes, Army Research Office developers explain, offer a new level of processing and transmission performance which not only exceeds the much-discussed 5G technology -- but brings the prospect of evolving toward 6G speeds - and beyond. The potential implications of this kind of technology have few limits, and span both near and far term possibilities, Dr. Joe Qiu, program manager, solid state and electromagnetics at the Army Research Office, told Warrior in an interview.

These speeds, developers tell Warrior, massively exceed the performance parameters of existing consumer electronics, such as cell phones. Qiu explained that carbon nanotubes are now known to be capable of high-speed, efficient electron transport; they are able to achieve a much greater level of high-frequency transistor technology, Qiu explained.

What this amounts to is that these kinds of semiconducting transistors can exponentially improve performance, speed and efficiency of Radio Frequency electrical signals. This, the ARL report explains, can impact a wide sphere of military systems to include radar, electronic warfare systems and a wide-range of combat essential sensors.