7 Things About America to Be Grateful for This Thanksgiving 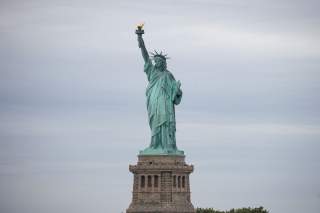 Endless war. A $23 trillion national debt. Intrusive regulation. Criminal injustice. Presidents who don't think the Constitution limits their powers. It's easy to point to troubling aspects of modern America, and I spend a lot of time doing that. But when a journalist asked me what freedoms we take for granted in America, I found it a good opportunity to step back and consider how America is different from much of world history — and why immigrants still flock here.

Rule of law. Perhaps the greatest achievement in history is the subordination of power to law. That is, in modern America we have created structures that limit and control the arbitrary power of government. No longer can one man — a king, a priest, a communist party boss — take another person’s life or property at the ruler’s whim. Citizens can go about their business, generally confident that they won’t be dragged off the streets to disappear forever, and confident that their hard-earned property won’t be confiscated without warning. We may take the rule of law for granted, but immigrants from China, Haiti, Syria, and other parts of the world know how rare it is.

Equality. For most of history people were firmly assigned to a particular status — clergy, nobility, and peasants. Kings and lords and serfs. Brahmins, other castes, and untouchables in India. If your father was a noble or a peasant, so would you be. The American Revolution swept away such distinctions. In America all men were created equal -- or at least that was our promise and our aspiration. Thomas Jefferson declared “that the mass of mankind has not been born with saddles on their backs, nor a favored few booted and spurred, ready to ride them legitimately, by the grace of God.” In America some people may be smarter, richer, stronger, or more beautiful than others, but “I’m as good as you” is our national creed. We are all citizens, equal before the law, free to rise as far as our talents will take us.

Equality for women. Throughout much of history women were the property of their fathers or their husbands. They were often barred from owning property, testifying in court, signing contracts, or participating in government. Equality for women took longer than equality for men, but today in America and other civilized parts of the world women have the same legal rights as men.

Self-government. The Declaration of Independence proclaims that “governments are instituted” to secure the rights of “life, liberty, and the pursuit of happiness,” and that those governments “derive their just powers from the consent of the governed.” Early governments were often formed in the conquest of one people by another, and the right of the rulers to rule was attributed to God’s will and passed along from father to son. In a few places — Athens, Rome, medieval Germany — there were fitful attempts to create a democratic government. Now, after America’s example, we take it for granted in civilized countries that governments stand or fall on popular consent.

Freedom of speech. In a world of Fox and MSNBC, Facebook and Twitter, it’s hard to imagine just how new and how rare free speech is. Lots of people died for the right to say what they believed. In China, Russia, Africa, and the Arab world, they still do. Fortunately, we’ve realized that while free speech may irritate each of us at some point, we’re all better off for it.

Freedom of religion. Church and state have been bound together since time immemorial. The state claimed divine sanction, the church got money and power, the combination left little room for freedom. As late as the 17th century, Europe was wracked by religious wars. England, Sweden, and other countries still have an established church, though their citizens are free to worship elsewhere. Many people used to think that a country could only survive if everyone worshipped the one true God in the one true way. The American Founders established religious freedom.

Property and contract. We owe our unprecedented standard of living to the capitalist freedoms of private property and free markets. When people are able to own property and make contracts, they create wealth. Free markets and the legal institutions to enforce contracts make possible vast economic undertakings — from the design and construction of airplanes to Bitcoin and Venmo. But to appreciate the benefits of free markets, we don’t have to marvel at skyscrapers while listening to music on our iPhones. We can just give thanks for enough food to live on, and central heating, and the medical care that has lowered the infant mortality rate from about 20 percent to less than 1 percent.

A Kenyan boy who managed to get to the United States told a reporter for Woman’s World magazine that America is “heaven.” Compared to countries that lack the rule of law, equality, property rights, free markets, and freedom of speech and worship, it certainly is. A good point to keep in mind this Thanksgiving Day.

A version of this article was published in 2004 and was included in my book The Politics of Freedom.