715 to Superpower Status: That's How Many Nuclear Bomb Tests Russia Did 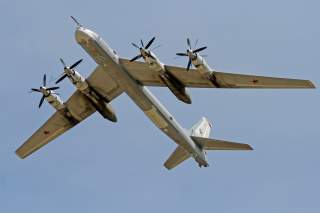 Although much of the radiation in the area has since died away, birth defects resulting from chromosomal abnormalities continue to show up in children born three generations after radiation exposure.

The Soviet Union exploded its first atomic bomb in 1949, just four years after the United States. Like the United States, the USSR conducted an aggressive testing schedule throughout the Cold War, ultimately conducting 715 nuclear tests over a period of forty-one years. Also like its rival—and to an even greater extent—the Soviet Union suffered nuclear contamination of its hinterland and unnecessary health risks to its people. Moscow was also responsible for testing of the large thermonuclear device ever built: the infamous “Tsar Bomba.”

The majority of Soviet nuclear tests were carried out at the Semipalatinsk Test Site (STS) in the Kazakh Soviet Socialist Republic. Like the Nevada desert, the Central Asian steppes functioned as a remote test site where atmospheric bomb tests could be conducted far from densely populated areas. 456 atomic and thermonuclear devices were tested at Semipalatinsk, many of them atmospheric tests.

Semipalatinsk was selected by former head of the NKVD Lavrenti Beria, who described the area as “uninhabited” and an ideal spot to test nuclear weapons. In fact the area surrounding the site was home to nearly seven hundred thousand people, many of whom lived in small rural villages. On August 29, 1949, the Soviet Union’s first atomic bomb, RDS-1, was detonated at STS. RDS-1 was a plutonium-based implosion device based on the Nagasaki bomb, from which secrets had been stolen. The bomb had an explosive yield of twenty-two kilotons, larger than the bombs detonated at Hiroshima and Nagasaki, in part due to a larger amount of plutonium. Radioactive fallout rained down on unsuspecting villagers in the region, a pattern that would continue for decades.

Like the U.S. military, the Soviet military also folded military exercises into their nuclear tests. The first such exercise was the Totskoye military exercise, in September 1954. This was the first test outside of Semipalatinsk and the first in European Russia, and involved forty-four thousand Soviet ground forces, including some stationed just 1.5 miles from ground zero. A Soviet Tu-4 “Bull” bomber dropped a forty-kiloton RDS-3 gravity bomb, which detonated at an altitude of one thousand feet. Within forty minutes of the explosion, troops were conducting maneuvers less than a mile from ground zero. Many contracted radiation sickness and developed radiation-linked diseases, such as cancer and leukemia, later in their lives.

The majority of Soviet nuclear testing took place at STS, but nearly a third of all tests were exploded at the Mityushikha Bay Nuclear Testing Range on the island of Novaya Zemlya. An island the size of Maine in the Barents Sea, Novaya Zemlya was truly a desolate land mass. 244 bombs were tested at Mityushikha Bay, including the infamous “Tsar Bomba,” a gigantic fifty-megaton bomb that dwarfed the largest American test, the fifteen-megaton Castle Bravo.

It is impossible to describe Tsar Bomba without superlatives. Detonated by the Soviet Union on October 30, 1961, the 59,525-pound bomb was released from a modified Tu-95 “Bear” bomber. Tsar Bomba was so powerful that the Bear’s aircrew were given only a fifty-fifty chance of survival. The thermal radiation could induce third-degree burns against unexposed flesh at sixty-two miles, and the flash of light was visible at over six hundred miles. Wooden houses were demolished at distances of over one hundred miles, and the blast wave shattered windows at 560 miles. Tsar Bomba created a mushroom cloud forty miles high and fifty-nine miles wide.

Overall, Moscow conducted 219 atmospheric, water and space tests. Like the United States, the Soviet Union was bound by the Limited Test Ban Treaty of 1963 to restrict testing henceforth underground. Another 496 tests were conducted underground.

Like the United States, the Soviet Union’s military and civilian population also suffered from nuclear testing. Military personnel were exposed during incidents such as the Totskoye test. In 1992, it was estimated that approximately sixty thousand people living in Kazakhstan near the STS test site had died of radiation-induced cancers. Although much of the radiation in the area has since died away, birth defects resulting from chromosomal abnormalities continue to show up in children born three generations after radiation exposure.

The Soviet Union tested its last nuclear weapon on October 24, 1990, two years before the United States. Far from being a magnanimous gesture toward world peace, the Soviet Union was actually mere months from total dissolution. During the 1990s, Russian and Kazakh news media claimed a test had been prepared for May 1991, but the .3-kiloton device was abandoned in a tunnel four hundred feet underground. It was allegedly destroyed in 1995 by an eight-hundred-pound explosive charge.

The former Soviet republics have not acted to resume testing. All but Russia have renounced nuclear arms and turned over any inherited arsenals for disposal. Russia has shown little interest in further tests, instead concentrating on a new generation of delivery vehicles including the Bulava submarine-launched missile, Topol-MR mobile missile and Sarmat intercontinental ballistic missile. The unofficial testing moratorium between the United States and Russia continues to hold—for now.