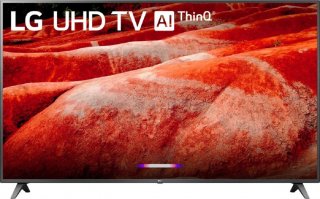 The LG 86UM8070PUA is a large Ultra HD TV, which the South Korean company introduced at International CES in early 2019, and reaching the market later that year. The eighty-six-inch model is formally called the LG eighty-six inch Class 4K Smart UHD TV w/AI ThinQ. Its listed price on the LG website is down to $1,849.99, from its original price point of $3,299.99.

RTings reviewed the UM8070 series last September, and while its review was based on a smaller model, it considered it valid for the 86-inch TV.

“This is a decent TV for watching movies,” the review said. “The [82-inch] model has a great contrast ratio and very good black uniformity and thus can deliver deep blacks which enhance picture quality.” The review noted that the 86-inch model likely would have a worse dark room performance.

The RTings review praised the TV for a very low input lag and “extremely fast response time,” while also noting that its HDR “doesn’t add much.”

Another review, at ZK Electronics, gave the product a score of 86 out of 100. It gave the model an 86 score for display, an 89 for video feature, a 94 for “other features” and an 82 for connectivity.

The customer reviews on Amazon rated the 86-inch model an average of 4 out of 5, out of 231 customer ratings, with 80 percent of the reviews 5 stars and another 10 ten percent 4 stars.

“If size is what you're after, this TV obviously does the trick,” the top reviewer said. “I have a fairly big wall and was planning to use a projector, but ultimately landed on this TV instead as true 4k projectors are still very expensive.” The same review, however, noted that the black levels “aren’t good.”

“Smart TV—indeed smart—and super thin and responsive,” one five-star reviewer said. “Picture is like looking out your window.”

The top two one-star reviews are from customers who said the product arrived broken when they ordered it.