ABC Anchor Caught on Tape: Epstein Was “100%” Murdered in Prison 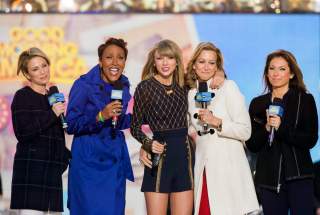 Leaked footage of an ABC News anchor complaining about her network’s squashing of a story on the deceased wealthy pedophile Jeffrey Epstein has renewed focus on Epstein’s cozy relationship with media elites.

“I’ve had this interview with Virginia Roberts — we would not put it on the air. First of all, I was told, ‘Whose Jeffrey Epstein? No one knows who that is, this is a stupid story.’ Then, the palace found out that we had her whole allegations about Prince Andrew and threatened us a million different ways. We were so afraid we wouldn’t be able to interview [Kate Middleton] and [Prince William], that we, that also quashed the story,” Robach said in the leaked footage.

The anchor also said she thought Epstein was “100%” murdered in prison, contrary to the official story that he hanged himself in his jail cell. ABC put out statements from the network and Robach attributing the anchor’s complaints to unspecified “frustrations,” though the statements failed to address aspects of her leaked comments.

The episode is yet another example of the extent to which Epstein, who allegedly sexually trafficked young girls for a network of wealthy and well-connected friends, enjoyed a cozy relationship with elite media figures.

Epstein hosted a slew of media elites at a 2010 party he threw for Britain’s Prince Andrew at Epstein’s New York residence. ABC News anchor George Stephanopoulos and CBS News anchor Katie Couric were among those reported to be in attendance. Stephanopoulos later said it “was a mistake to go.”

Former Vanity Fair editor-in-chief Graydon Carter in 2003 reportedly suppressed coverage into Epstein’s sexual exploitation of young girls. Former Vanity Fair reporter Vicky Ward alleged that Carter stripped references to Epstein’s links to underage girls from a 2003 profile on him — a claim that was backed up by reporting from NPR.

Former veteran New York Times reporter Landon Thomas Jr. is reported to have been longtime friends with Epstein. Thomas Jr. reportedly solicited a $30,000 donation from Epstein in 2017, while the reporter was still with the Times.

MIT Media Lab Director Joi Ito resigned in September after the institution was reported to have hid donations from Epstein for years after he became a convicted sex offender. Ito resigned from the New York Times’ board of directors that same month.